Oddly, nobody mentioned "chemotherapy" until one bottle of pills showed up in this ... 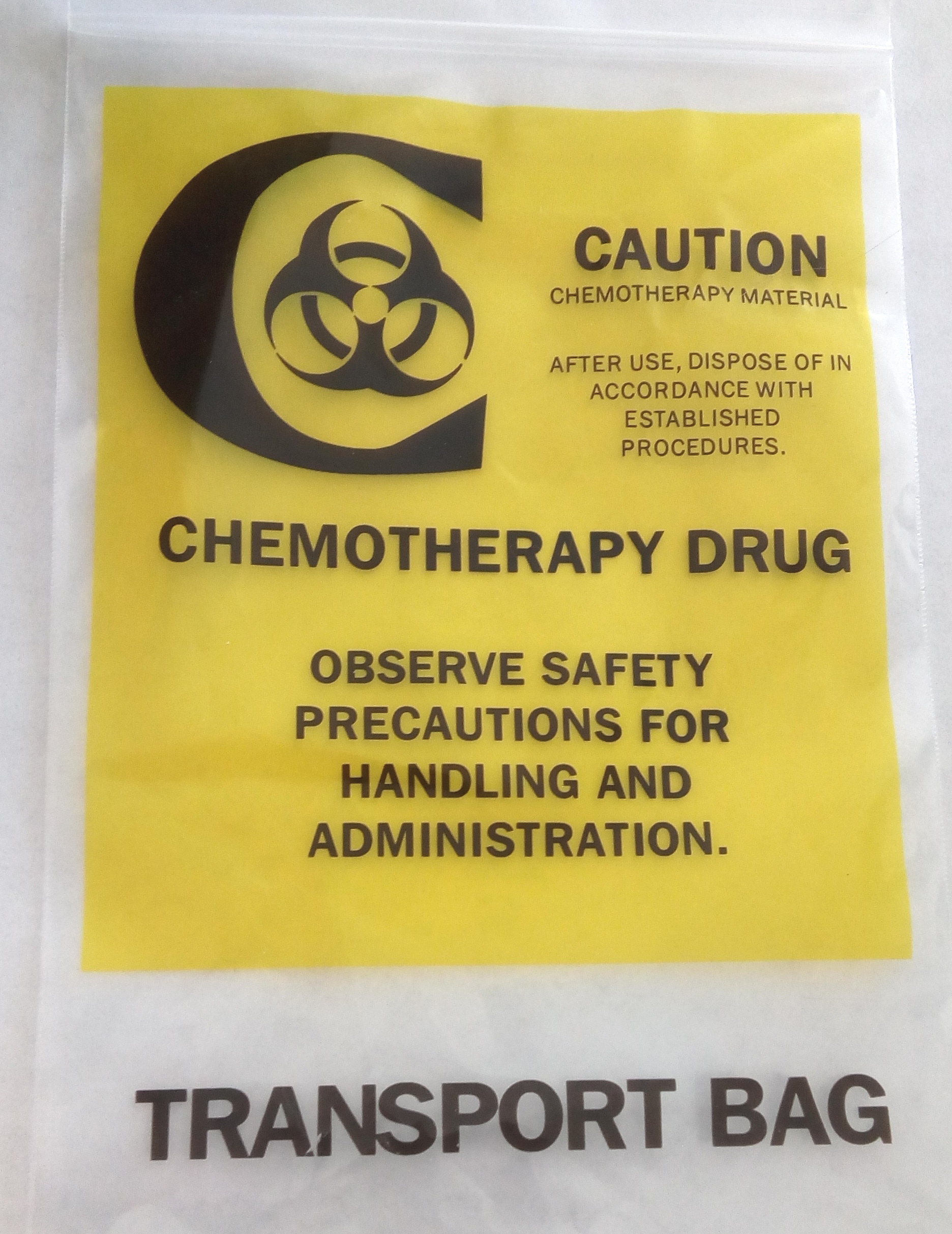 I'm on my first day taking the should-not-be-handled-by pills and the steroid that goes with them. I'm not feeling horrible (yet), but both the meds have long lists of side effects, none of which are particularly happy things (and both of them jack up blood sugar levels, so I'm sort of gearing up for some real bad mornings when my sugar counts are 300+).

After the second round (with a new fancy-schmancy robot machine) of radiation treatments ended up with my PSA numbers creeping up (they're still quite low right now, but they've notably increased every time I've had the test done), the radiation oncologist said I was pretty much done with that option, and passed me over to the medical oncologist. I've had two docs who "live to cut" and teach surgery over at Northwestern say that I'd be looking at that as only a last option, so I guess I'm down to Chemo or Cryo ... and they're going with Chemo first. Bleh.

It would have been nice if the new oncologist had mentioned "chemotherapy" at some point, rather than "oh, I think I need to get you on a couple of additional pills", because getting the one in that bag was a bit of a psychological shock!

I was sitting in Starbucks, trying not to fall asleep reading, when the odd urge to write a poem surfaced.

Given that I think I wrote all of one poem in the past 3 years, this was odd, indeed (especially after all those years of 250/yr).

However, it did successfully squirt of out my brain and onto the page, and here it is for all to see (click on the "v"):

I was able to get in to see my therapist today ... and we have an appointment for the 31st.

I can never remember the good stuff ... only the trauma.

I could make cookies brilliantly a dozen times, but only the burnt batch will stick in my mind.

And because everything I initially pull up about the past is horrible, my expectations for the future are hideous.

I want to curl up in a ball and hide in a corner.

Suicidal Depression
for One and All! 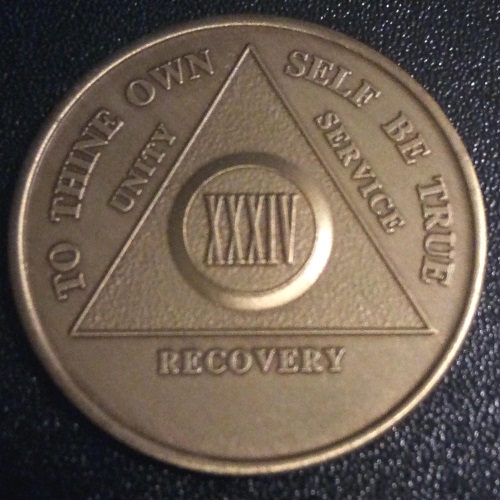 Well, this time seems oddly special, because the dates lined up on the calendar the same way they did back in 1985. Not that there is anything particularly special about the 34th anniversary of my not drinking ... except, perhaps, that I'm still here and still not drinking.

Needless to say, the past year and a half have been the biggest nightmare I've lived through (including that near-fatal car crash back in '93), and the odds of me killing myself in the midst of this were quite good, and one might assume that I would slink "back into a bottle" to help blot out the hideousness of existence. But, no.

On Sunday night, June 30, 1985, I was out boozing it up as usual, while perhaps getting back in a bit early so I'd be rested for the appointment I had on Monday morning, with a psychiatrist which I was hoping would help me get over some emotional issues I was having at the time. I ended up sitting across the desk of a psychiatrist all right, but this particular one was operating as the intake person for the "Chemical Dependence" program down at Northwestern hospital. Ooops. Guess I'd been snookered.

I was very proud that my vitamin regimen was approved by the Dr., not wanting to add or subtract from what I'd been taking to keep myself held together ... this was also good as it sort of took the inpatient program off the table. However, it was stressed to me that no psychiatrist was likely to work with me when I was drinking as much as I was (which involved pretty much a baseline of a liter of gin per day). I was so pissed off with the world, and in such a negative space, that I was basically saying "fuck it", and took them up on the offer of starting the outpatient program as of that night.

The program was 3 hours a night, five nights a week, running (as I recall) 6-9pm M-F for four weeks. The first hour of each week was an NA meeting, and the last hour of the week was an AA meeting.

Being that I was a "dedicated drinker", who had never even considered stopping drinking until sitting at that desk Monday morning 7/1/85, it took me six weeks to get through the 4-week program ... not because I was drinking, but because I was still having issues with the concept.

Frankly, for me, stopping drinking was sort of like suicide ... it was dropping the only thing that made living manageable ... in essence, throwing down my shield and yelling to the universe "OK, motherfucker, do your worst!", which, needless to say, it did over the next 30-some years.

If there was one thing that I wish I'd got out of the Chemical Dependence program, it would have been coaching regarding AA. The only thing that got through to me in those six meetings was "GodGodGodGodGodGodGodGodGodGod", which wasn't a game that I was interested in playing. So, rather than being a good little recovering alcoholic, for my first thirty years of not drinking, I probably attended less than 10 AA meetings (including the 6 in the CD program). In fact, I ended up back at my local bars every night after the program (albeit not drinking), and continued to hang out at the bars for about nine months following (until I got sick of being the only sober person around). It's only since getting into AA in the past 3 years that I see how incredibly useful it could have been.

Once retreating from the bars, I pretty much isolated. Yes, I had 10 years of Cubs tickets (weekend then weekend/night packages ... I could suddenly afford to go when I wasn't buying a 16oz beer every inning), got married, etc. but I was exhibiting most of the signs of being a dry drunk. Now, I'd had this tag applied to me on occasion, but I'd always brushed it off as being some "cultist" (in AA) being resentful that somebody had managed to stay off the sauce long-term, without their "God crap".

What this expressed itself as most of the time was living in rage and/or self-loathing for 30 years. Everything that used to make me want to drink suddenly was re-cast as "the universe trying to make me fail" in my not drinking, so minor psychological/situational discomforts that would have previously been dealt with by applying gin now were met with seething anger.

Of course, in my mind, I didn't qualify for AA, since (of the "first step" elements) I was "obviously" not powerless over alcohol, as I was quite successfully avoiding drinking year after year after year, and my life, while not working out the way I had hoped/anticipated, was still "manageable".

The nightmare that the past year or two have been had a long decline leading up to the carnage. On Sunday evening, July 17, 2016, I was sitting in the McDonalds at the corner of North & Wells, working through a coin-flip situation of throwing myself in front of the El at Sedgwick or going to some sort of meeting. I almost ended up going up to the Hare Krisna temple (which would have at least included some free food), but decided that it was going to take too long to get there in time, so decided to head down the block to the Mustard Seed AA club.

I knew of the Mustard Seed, as they used to have been down in my old neighborhood, and I had wandered in for a meeting on my 30th anniversary at the current location "for shits & giggles" ... so I was familiar with the location. I ended up meeting a guy there who was my age, and had a similar "chemical history". He encouraged me to go to another meeting the next day where he was "giving the lead" (speaker), and there I was prompted to try another one the next night. At that one I met a couple of guys I'd gone to high school with, one of whom pressed me to do a "90 in 90" - ninety meeting in ninety days. Being the OCD maniac that I am, that was the sort of challenge that hooked me, and for the next 619 days I went to 628 meetings - right up to missing a week's worth during the move.

The move led into lots of health issues, including the broken leg/ankle I had last October (leading me to only making 3 meetings in the 4.5 months following), which kept me out of "the rooms" on the daily basis that I'd been doing, but I'm back to showing up about 10-20 times a month.

Anyway, on Friday I got my 34 year coin at the big open group meeting. There it is. I've still not achieved the "sanity" of the second step, but the search for that was what got me into the rooms in the first place. 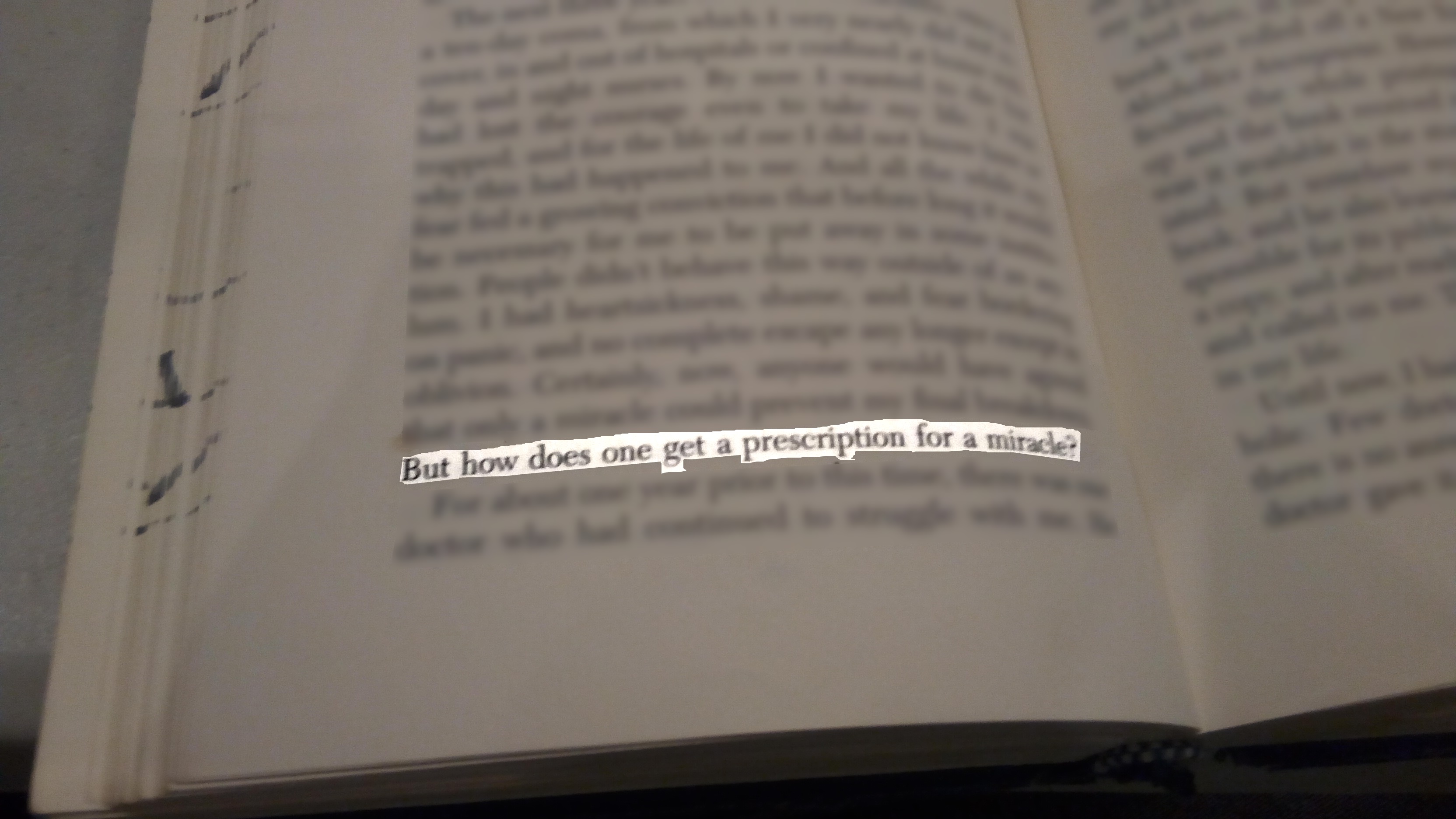