So, I've had a bunch of stuff kicking around in my head, and figured I'd spew here. Frankly, a lot of this was triggered by that picture over there ===> which I'd seen floating around the web. I'm no "comic book guy" these days, but 35 years ago I was, and the Avengers was one of the comics that I followed (not as closely as some others, but still). When I saw that picture I was quite surprised that it appears to be "official" Marvel art (click on it for details), as the "look & feel" just isn't what I associate with the Avengers, but it's been a while. However, one thing that stuck out there was that Hawkeye had the purple "bird" hood thing on, which got me thinking about the movie. Honestly ... this is why I'm writing about this, because it's SO bizarre for me to be spending any mental effort on comparing old comic continuity with the movies (OK, it's happened before with X-Men, but elements of those movies were way messed up). 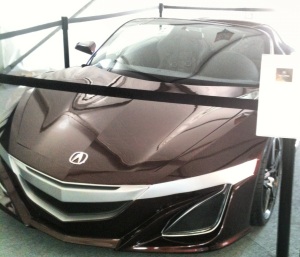 Part of me felt that it was wrong to have Hawkeye not have his classic costume, as goofy as it might have been, while the other part of me felt that the character worked better as an oddly-equipped assassin / special forces guy (especially as a counterpart to the Black Widow). And it really bothered me that my brain was taking time to make this an issue in my head! I had liked the subtle (very subtle, as neither Jeremy Renner nor the character were credited) way that Hawkeye had been "slipped into" the Avengers movie continuum in the Thor movie, but, again, had he been in the costume it would have been clearer!

By the way, yesterday I was at an Acura event (yay, Klout ... although I was already scheduled to be there for work when I got the "perk") where they had a S.H.I.E.L.D. car from the movie, which I snapped a pic of (<=== over there). I noticed that the color scheme for the car was sort of Hawkeye-esque ... as far as his classic costume ... which further churned this stuff up in my head!

To even mess things up more, I'd managed to see the TV commercials for the new Bourne movie a dozen times and kept thinking "Gee, I know that actor, but from where?" It was bothering me (because, frankly, I was drawing a total blank), because everytime the commercial ran I got into that same "perplexed zone" as to who he was. This did not resolve itself until I unrolled the poster that came with the other swag from the Acura event ... which was an Avengers movie poster and suddenly the right synapses started firing and I made the connection.

Oh, and while we're on hawk stuff ... the picture over there ===> (click for a larger version) is one Daughter #2 snapped the other day of one of the hawks that nest on the top of our building taking a break on our window ledge! Pretty cool. I'm amazed that bird didn't take off when The Girls got up close for a pic, but I guess it hung out, since she had several shots of it. If you note (on the bigger image) the bird's foot has a band on it, so it's one of the ones released down here to help control the pigeon/rat population. The birds seem to like our highrise just fine as a home (I guess it's just another high cliff to them), and to judge from the occasional pigeon-parts that end up on the ledges, they must be doing a decent job.

Anyway, I wanted to get this stuff dumped out of my head, and figured the greater L.J. universe wouldn't mind me doing it in here! I wish I was posting more, but I've been so insanely busy with this new gig (I'm averaging under 4 hours of sleep out of 24) there's been dang little opportunity. I'm even backed up seven books that need to get reviewed, and I'm beginning to wonder where I'm going to find the hours for that (of course, you'll pretty much be the first to know when I do crank out some).

Yes, it was bothering me when I got that post up earlier ... I knew I had one other nerdy bit of news to blither on about, but (no doubt due to the previously noted sleep dep) I couldn't come up with it while writing then ... however, it just popped back into my head.

Now, I didn't see all of the Olympic opening ceremonies (I got in somewhere around the L's in the parade of nations, and watched through the rest) but I understand that there was a certain segment of the population that was a bit miffed that a particular very long-running British sci-fi show didn't make it into the program, despite being on the air for fifty years.

I then heard that the Dr. Who segment had been "cut due to time", which I thought was painfully ironic ... so much so that one might even entertain the notion that they intentionally cut the segment just to be ironic, but maybe I'm just over-sensitive to hipster-isms. I hear tell the only surviving nod to the show was a brief bit of the theme that was in another segment. I suspect the Mary Poppins thing (which I didn't see, but saw a pic from) would have been far more interesting had it involved Daleks.