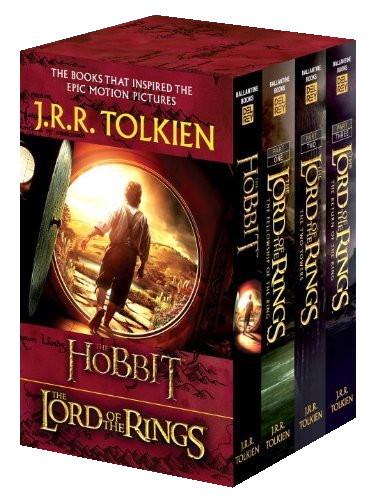 I love bookstores ... really do, always have. However, I can't see them surviving much longer, which is sad. And I'm one of the reasons they're going away.

My elder daughter noted, while discussing the upcoming Hobbit movie, that she hadn't read any of the Tolkien books, and would be amenable to doing so. Since I hadn't gotten her any "special Daddy gift" for Xmas yet (such as these have been over my years of unemployment), I decided this would be a GREAT idea.

Now, we have a B&N just up the street from us, and they have these really cool big fancy editions (embossed leather covers, gold edges, ribbon bookmark, etc.) of classic titles (and some more recent), from Shakespeare to H.G. Wells to Douglas Adams, ranging from $10 to $20, and I was hoping that they'd have one of Tolkien, with The Hobbit and the three Lord of the Rings books in one volume (I'm pretty sure that I've seen one of those there before).

As I'm a cheap bastard anyway (made more so by being near-broke for almost a decade), I really didn't want to just buy four books at full price. I recall having "mass market" paperbacks of these back in highschool myself, and figured that going that route wouldn't much bother Daughter #1 (and she'd probably prefer being able to schlepp those around rather than being anchored by a big hardcover), so went that way for a "plan B".

For having spent my whole career in marketing, you would think that I wouldn't be offended by stuff like this, but there had obviously been a recent new edition of the mass-market paperback, with cover graphics culled from the movies. There were 3 of the 4 books on the shelf with previous non-movie covers (which I would have MUCH preferred to have gotten her), but not all 4. The "movie" cover books were each a buck more than the regular ones, and I really resented having to pay a premium for something that I didn't want in the first place. The four books were also available in a boxed set (the same mass-market paperbacks in a simple cardboard enclosure), but this was also priced at a premium over just buying the four books ... no discount for buying four ... no, an up-charge for another couple of pennies of cardboard!

And, of course, with the movie coming up, none of this was on sale.

So, after having spent the better part of an hour poking around in B&N, comparing prices, editions, etc., I leave disappointed. And go home and look at Amazon.

Obviously, Amazon is not likely to have the big fancy gold-edged hardcover from B&N which I would have preferred to have given to Daughter #1, but they do have the 4-book boxed set for 40% off of the cover price ... which not only undid the "up-sells" for the movie graphics, but brought the per-book cost down to a level that I figured (having "geezer" pricing gauges at this point) was reasonable for mass-market paperbacks. Heck, I even had to throw in another book (admittedly a Dover Thrift Edition, but still) to get the order up to the free shipping promised land.

I'm going to miss being able to poke around on shelves and tables, and get a good "feel" for different books ... but when the on-line guys have the same exact thing at nearly half the price, I doubt the brick-and-mortar stores will be around much longer, which is very sad.

And, I regret to say, it's partially my fault.

Over the past two hours I have run into five different things that have made me depressed and weepy ... music, pictures, and various things that have cycled me back into the more dire aspects of my "reality". It's like there's nothing in my environment that doesn't point to doom. This sucks.

I quit drinking over 26 years ago ... but this past week I've felt a level of desperation that has made me VERY VERY MUCH miss drinking. Back when I quit I largely drank so I never had to FEEL anything ... and I really am missing that these days.

I am such a failure that it's hard to even TRY any more. Nothing is going to eradicate the past decade of declining finances, and at this point I can't see anything saving our home. I always hated the holidays, but they've become especially grim for me because I can't provide anything for my kids.

It would have been better for me to have drank myself to death in my 20's ... that's what all the "smart money" was on anyway, that's for sure.