Man ... another long day ... away from the keyboard, mostly ... took a lot of concentration to make it through the radio shows this evening.

"What radio shows?" you ask ... well, I'm on two shows back-to-back on Sunday nights over on Blog Talk Radio, part of the Pagans Tonight line-up (they do 2 hours of programming 7 nights a week at this point), which sort of evolved out of programs from Witch School International, for whom I had been doing a lot of web (and virtual world) work for over the past five or six years. Ed Hubbard, who had been one of my first authors (as the editor of the "Your Voice" collection from the 1993 Parliament of the World's Religions) back in my days running Eschaton Books (as well as being the guy behind Paganics - the "worm business" I'm involved with these days), had been doing a long-running radio show in Chicago, and, with the development of web-based radio, this ended up on Blog Talk Radio. A couple of years back, there had been a push for some video as well (see Witch City Soap, for the Halloween-season show coming out of Salem, MA), which then became the seed for the Young Witches project (that I was working on for both web and social media). This, unfortunately, ended up with a whole string of stuff going wrong, and never ended up in the "reality show" that it was envisioned to be (although you can, I believe, order DVDs of the show as shot on special order). 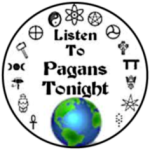 Anyway, one of the elements of the Young Witches project was a Blog Talk Radio show ... and I was a frequent guest on that, initially being "the monkey on a tricycle" to perk things up when the show hit slow spots, and then as a regular feature. This was initially followed by The Pagan Variety Show and I also "guested" on that most weeks. When Ed finally pulled the plug on the Young Witches, he left The Pagan Variety Show in its regular (9pm central) time slot, and instead of slipping in a replacement show before it (most of the Pagans Tonight programming is at 8pm and 9pm central), he created a new show, Pagan Science Radio, running afterwards at 10pm. I'm one of three regular panelists (along with Ed and Alan Salmi) that discuss various "scientific" sorts of things with a Pagan slant (or "Pagan/Magickal" things being discussed from a scientific perspective), along with occasional guests. Ed, Alan, and I are all painfully well-read on things both scientific and mystical, so we bring quite a lot of "informed opinion" to the show. Alan (who's a psychotherapist by trade) brings the "serious" perspective, Ed sort of presents the "metaphysical" side of things, and I'm the crusty, cynical (and ever-so-slightly solipsistic) curmudgeon with an extensive background in shamanism, Vajrayana, etc. The combination of the three of us tends to work pretty well, and our audience keeps growing.

Of course, as is the case with damn near everything I'm ever involved in, we're not making any money at this, despite having many thousands of listeners ... and the costs of running the shows are still coming out of Ed's pocket. We're hoping to have a PayPal "tip jar" up this week (when I'm able to triage out the time to get that coded, of course), and if just 5% of our audience threw a buck in each show, we'd at least be covering the costs. I guess now I know how Public Television feels.

Again, with the "unending job search", I've been keeping quiet on a lot of things (I'm sure the Pagan stuff I've been working on over the past five years has cost me interviews as it is), so that's why I'd not brought this up much ... but since we're getting more traction on the numbers at Pagans Tonight (and especially the Science show) I'm going to be out there connected to it one way or the other, so I might as well start flogging it in my channels! So, if you want to hear me blither extensively, do "tune in" on Sunday nights over on Pagans Tonight ... and (thanks to the Blog Talk Radio set-up), you don't even have to be "live", as within an hour or so of each show a recording of it will be available in the archives (where there are nearly 1,200 shows from the past four years!).