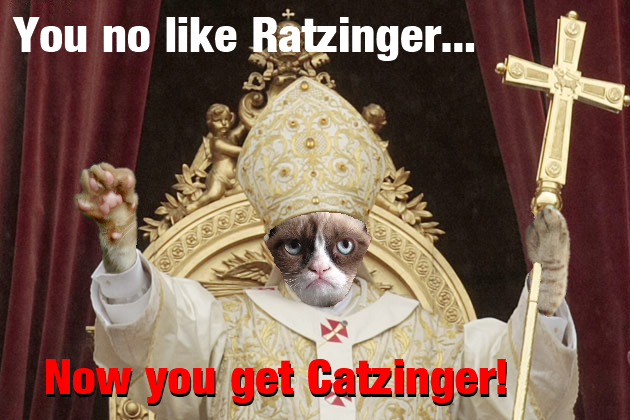 Geez, if I'm not doing a NaBloPoMo I can never get around to posting in here. I actually had content to share but it got stale (not that you would have cared much in the first place, but it's sort of pitiful showing stuff that was keeping me AFK the better part of a week after that's history.

Speaking of history, however, there's this thing about Ratzinger being the first Pope in 600 years to get a gold watch and his choice of plum vacation spots to go sip Mai Tais on the balcony of the local monastery/nunnery. Of course, coming from Chicago, I have to suspect that there is some real juicy scandal hiding just off-screen and that everything's being "handled" so that it doesn't blow up in their faces ... think of Michael Jordan's "retiring to play baseball" ... I'm guessing that there's something like that in play here.

Anyway, this stuff was flinging around the internet, as was the now-ubiquitous "frowny cat", and I figured (in a moment where my OCD was really wanting to push pixels around) I'd mash the two up ... why not, after all, having a FB meme as Pope is not more ridiculous than having a "community organizer" in the employ of ACORN being POTUS ... heck, it would probably be better for the Church than the current situation is for the US!

Oh, speaking of employment ... no, no ... don't get excited ... I can't even get a freak'n interview to save my f'n life ... but I've been getting some (drumroll, please) paying projects coming in, and although they're odd and complex, and not in the sweet spot of my skill sets (it's more a fit with my OCD, frankly), it's over-all something that might grow to the point to being almost full-time (if project-based) work. Yay! It's been a LONG time since I've brought in any money, and it's nice to have some coming in.

On other fronts ... I just put a post up in the long-neglected The Job Stalker. As you may recall, I'd brought in a buddy to initially write one of three posts a week, and when that debacle of Heads Up Communications hit (where I was "employed" - but unpaid - for about 10 weeks last summer) I sort of tossed the reins over to him. Unfortunately, his situation changed and he had to step back from doing that, leaving it sitting there. I figured that I ought to do a post encouraging folks to volunteer, rather than having his "hasta la vista" post being top of the deck.

The reason that I was poking around in the Chicago Now back rooms was that I was pulling together stuff for the new blog that I'm going to be cooperating on, Green Tech Chicago (as mentioned a couple of weeks back). We should have the first post up there tomorrow, if all goes well. No doubt I'll be flogging it in here.