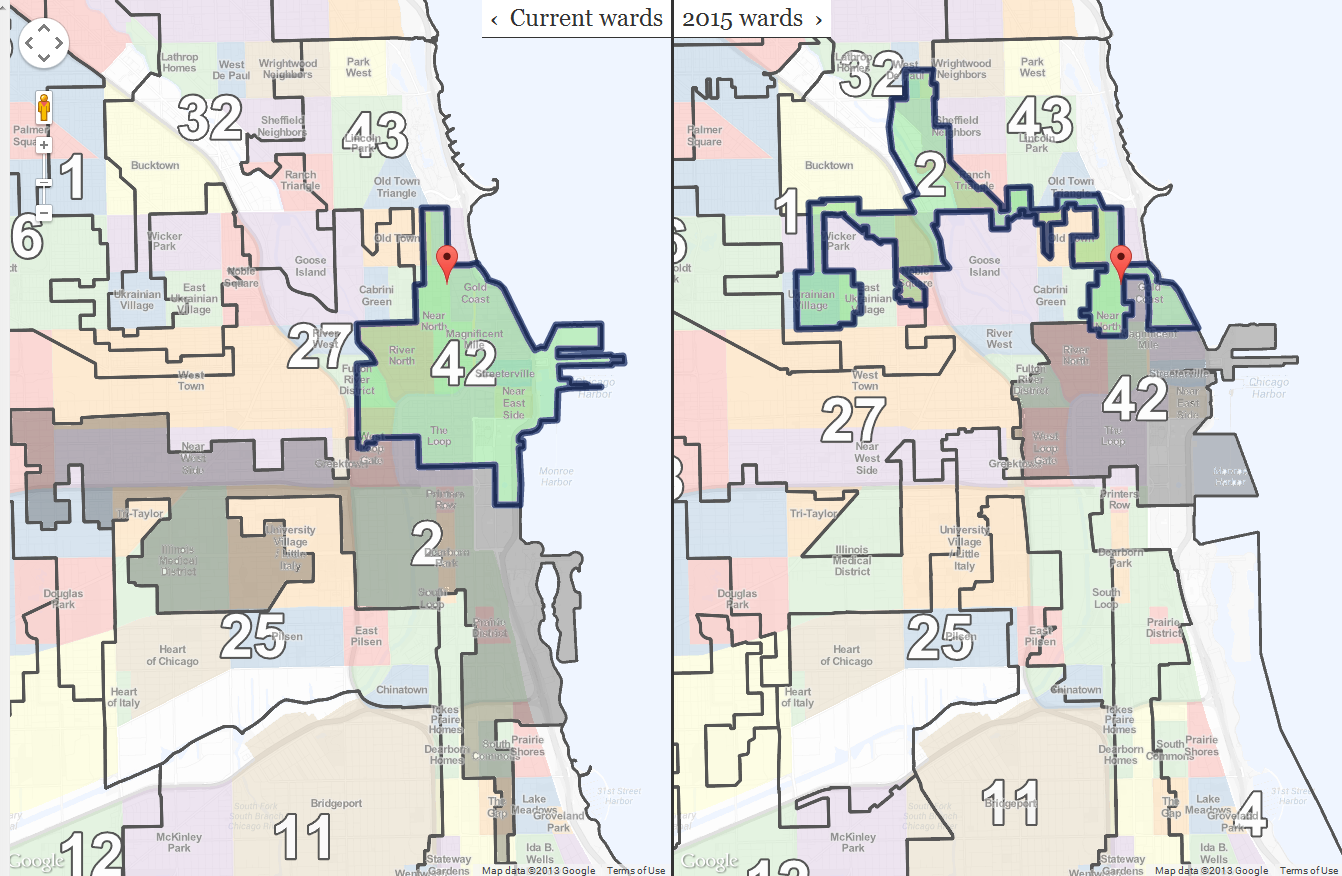 Chicago is Chicago is Chicago ... and for as great looking a city as it is, sometimes it ain't pretty. A lot of the not-pretty parts are down at City Hall, of course, and I think I've mentioned before the bizarre changes to the Ward map that came down the pike in the past year.

The maps here (click on the graphic to get a bigger version) shows the previous and current maps side-by-side, and I've added shading to the originals to make my Ward stand out. Now, I've been in the 42nd Ward for decades, but things got re-mapped and now my side of State St. is in the new 2nd Ward. As you can see, the 2nd Ward has been completely re-done, from being The Loop and the near south and west sides to a ridiculously gerrymandered monstrosity wedged in between other existing Wards on the Near North Side.

One thing that I still don't get is that the new map is nominally going to be "the map" in 2015, yet the last election cycle had us voting in new precincts (the first time in 33 years of living in this building that I didn't just go down to the lobby to vote!), as well as dealing with a new Alderman. Having these things kick in back in 2012 is sure jumping the gun on 2015.

I feel bad for our new Alderman, Bob Fioretti ... as he got pushed out of his existing Ward (the old 2nd) and into a totally new geographic zone. Once you get the focus wider than making sure Streets & San picks up the trash and plows the snow, almost everything in politics in Chicago is about race, and the city has been fairly evenly split, population-wise, between Whites, Blacks, and Hispanics for a long while. However, for whatever reason, the number of Blacks in the city has drifted downward, with the slack getting taken up by the Hispanics ... and the Black politicians are desperate not to lose any seats in the City Council. When Fioretti first won his seat in 2007, he defeated a long-term incumbent Black politician, beating her two-to-one in a run-off in the primary election (which, in Chicago, with its 90% or so Democratic Party lock, is the election), and the Black Caucus had it in for him ever since. Obama-buddy Mayor Rahm Emanuel used the Black Caucus' proffered map as the starting point for the City's Ward re-map (which got ramrodded through the City Council with no debate, discussion, or public commentary), and Fioretti was screwed.

He's been smart, though, being very active in social media, and responsive to queries on Twitter and Facebook ... so at least he's not necessarily an unknown up here ... but this afternoon's "2nd Ward Meeting" (at a coffee shop in my neighborhood) is the first chance I've had to actually meet the guy. He's a member of the "Progressive Caucus" (and you know how I feel about "progressives" in general), which makes me a bit nervous, but I hope he'll be an ally in all the "green" stuff that I'm involved in otherwise!

Oh, by the way ... I was going to make this a Facebook post, but figured I'd do it here and then just share it there. Lucky you!