Well, I got surprised this weekend with a couple of Cubs tickets ... part of The Wife's trying to figure out what to do about my quickly upcoming birthday. She, of course, forgot that I don't have a lot of non-pixel friends to drag off to sporting events, so I ended up convincing Daughter No.1 to come along. It was a pretty great day for a ballgame, if a bit chilly (in the seats, in the shade, in the wind). The pic over there ===> was one of the panoramas that my camera lets me stitch together, and this one turned out better than usual (click on it for a bigger version).

I used to go out to the Cubs games all the time. I don't recall the exact dates when I had season seats, but I'm guessing I had them from 1986 (past my sobriety, before the lights came in) to 1996 (I know I still had them when Daughter No.1 was a baby, as she would frequently be in a car seat next to me at the ball park) ... first with the weekend package and then with the weekend/night package (I was there on 8/8/88 when they turned the lights on at Wrigley!). 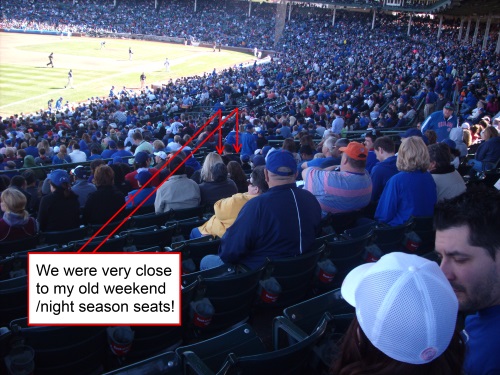 We were actually very close to where my old seats were. The picture over here <==== (click for a bigger version) shows where they were. Those were awesome seats, as they were right on the front row of the Terrace Reserve section, and on the end right by a stairway heading down to the bathrooms and concession stands. And to think that "back in the day" they were just $5 a piece!

Frankly, I was surprised that The Wife had managed to find some $14 face value tickets (with obscene charges added, of course) ... the Cubs have gone to a convoluted system of different prices for different games, and the same seats could have five different prices (in this case ranging from $14 to $46), depending on the opponent, date, etc., and in the infrequent times we've been to the ballpark since I gave up my season seats, it's always been painful (especially in reflection of $20 for two seats for two games when I first got the weekend package!).

Oh, and as those who know me will testify, I am notorious for trying to wrest puns out of nearly anything, and one particularly tortured one that I've had for the 36-Broadway bus came up during the game! Now, it's easy to flip the 22-Clark bus into the being the "double deuce", but the 36 presented more of a problem ... however, today we had the situation arise where "shit, error on the shortstop!" was a natural phrase, which, of course, is the long form of "turd, E6!", aka 36. And yes, that is what my brain does all day when it's not otherwise engaged.

And, of course (given the way this season has progressed), the Cubbies lost, 5-3 to the Atlanta Braves, who managed to clinch their division with the win.