(sigh) Today was a "terrible, horrible, no good, very bad day" ... but because I opted to do a NaBloPoMo, here I am posting from one of my kids' computers.

What? You're jumping ahead with logic and stuff? Yes ... my computer up and DIED on me today. It had been running a little slow, so instead of just shutting down FireFox (which, with the two Flash instances it always has running, is usually the thing that just keeps grabbing more and more system resources), I decided that I'd close it down while I went to take a shower. When I got back, I started up the computer, and it loaded just fine, got into Windows, and I was trying to open a couple of things (while start-up stuff was still loading) and I had a Blue Screen Of Death. But, this was not just any BSOD ... I could no longer boot the computer.

It turns out that about every fifth time I tried turning it on, it would get to a screen where it would be trying to repair the start-up ... but not succeeding. It eventually gave up and asked if it could send some smoke signals to Microsoft. All of this about 2 hours before I was supposed to be doing a phone interview for a writing gig. Just what I needed.

Anyway, as I warned you might be coming, here are the first few posts from Green Tech Chicago ... I'm going to bunch these "thematically" mainly - rather than going month-to-month - and only feature the ones that I wrote (in the first month there were a few by Ed ... but you can go look those up on your own). 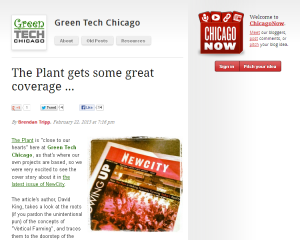 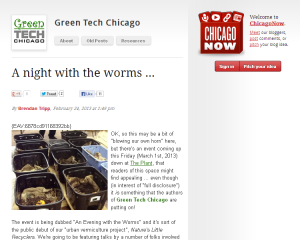 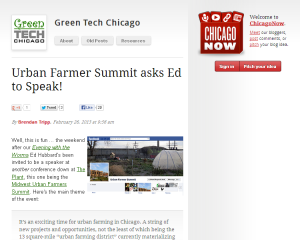 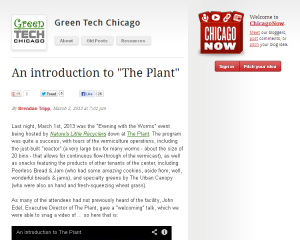 Clicking on the screencaps will whisk you off to the actual blog post. But you knew they would, didn't you?

I'm hoping to be back to having my own computer again soon ... I ended up ordering an off-lease refurb from TigerDirect and they tend to get stuff ordered by mid-afternoon delivered here the next day, but if it's not here tomorrow it will be certainly here by Saturday. Hate to spend the money on it (even the cheap one I ended up getting), but I just can't operate without a desktop system.

More of this to come in the next few days!