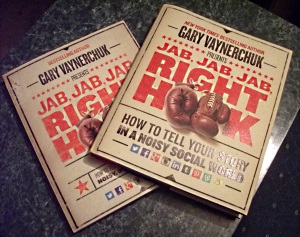 As regular readers no doubt will recall, we live in a highrise in downtown Chicago, and so have a "package room" down in the basement where deliveries for all 600-some apartments here come in and are processed. We get slips of paper under our doors when there are packages there for us, and one of these had been sitting around for a couple of days (with my new schedule I'm never here when they're open during the week). I figured it was a book, but I really wasn't expecting anything specifically, so when we were coming in from the store this afternoon, we went in through the back alley to pick this up.

I was very surprised to see that it was a hardbound copy of Gary Vaynerchuk's new "Jab, Jab, Jab, Right Hook: How to Tell Your Story in a Noisy Social World", which I'm presently reading in the original "ARC" (advance reading copy) version that the good folks at HarperCollins had sent out a few weeks back. I've never had a publisher follow up on an ARC with the published version, so this was a bit of treat. Of course, sometimes ARCs are quite rough (I've seen ones that have just been laser printouts of the galleys), and the one for Gary's new book lacked a lot of the finesse that's evident in the hardcover (nice paper, color pictures, various things that just had placeholders for page number references, etc., being updated), so perhaps they felt that reviewers weren't getting the "full effect" of it ... I must admit that the high-quality paper and the color images make a huge difference in the reading experience!

One of the "rules" of the ARC game is that you're supposed to not mention stuff like missing charts, or things like having "P##" in holding space for a page number, or similar missing stuff in one's review ... but, frankly, sometimes it's hard to "guess" what the book would be like in its final version, and I'm sure that effects how many reviewers end up feeling about the books they're seeing in ARCs. As such, it was probably a very smart move for the folks at HarperCollins to get this out (especially to reviewers like me, who'd not reviewed the book yet) showing what a nice book the actual published edition is!

Needless to say, you'll be seeing my review on this in a week or two (once I figure out when I'll have time to write reviews in my new "suburbanly-stressed" schedule!), but getting the "real" book after the ARC was an unusual enough occurrence that I felt like bringing it to your attention (plus, hey, it gets me one step closer to successfully completing that NaBloPoMo!).