I seem to have been somewhat disconnected over the past week or two. Not just here, pretty much across the board.

Things are "funky" and not in a Bootsy Collins way. Like Jefferson Airplane had it in Crown of Creation "Life is change - how it differs from the rocks.", I seem to be morphing into a new version of me. Honestly (and I ain't proud of this) my first thought was "gee, maybe it's my Saturn Return", but that's not due till the end of 2015, so who knows what's gotten into me. In any case, I'm finding myself in a place where none of my patterns fit any more. None of my habits (except a couple of bad ones recently acquired involving on-line time-sinks) do anything for me, and none of my "standard operating procedures" seem to be having any traction. 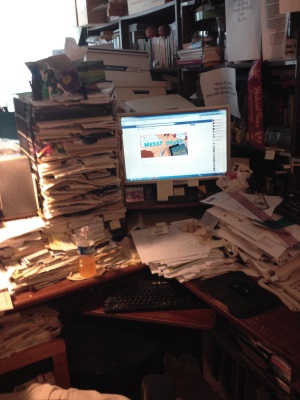 Needless to say, this is frustrating. Stuff that I'd just DO gets undone until I force myself to take care of them. Projects that should be effortless are suddenly a hard slog through high surf.

I find myself wanting to do something but having no idea of what that something might be. Almost all of my "what I've always done" (or at least, over the past X years), just doesn't seem doable any more. I sit down at my desk and have no clue what I should be doing (well, there are shoulds hanging over me like "send out resumes" and that sort of stuff). One thing that occurred to me was that I might have had an inexplicable remission of my OCD-like patterns, since a lot of "must do" things have slid into "don't care" of late, but this could just be a creeping ennui ... and, frankly, Google's definition of the term: "a feeling of listlessness and dissatisfaction arising from a lack of occupation or excitement" is pretty dead on. Not having an "occupation" has, of course, been a long-time issue, and there has been NOTHING for me to "get excited about" for a very very long time.

On a similar note, something sufficiently amused me that I actually laughed the other day. The sound was bizarre, because I can't recall the last time I had made it. The closest I've likely come to that in the past decade would be mocking "Ha!"s and cynical "Heh!"s ... the latter being a in-creep from on-line textspeak, no doubt.

Some days I feel like I'm living in the Buzzcock's Something Goes Wrong Again ... a feeling of "being snakebit" that keeps turning up with failures on what would be average ordinary "wins" for most folks. For instance, yesterday I was trying to get TWO Android tablets to work, one that I'd gotten for The Wife a year ago that she'd never used, and another that I'd gotten for the family at Xmas to use for Netflix. NEITHER of these would work ... the older one is totally non-responsive to screen touches, and the newer one refuses to connect with our Wifi (although it sees it, and will take the PW for it). I'd wager that 80-90% of the people opening up those packages, charging those units, and following through the instructions to set them up would have ZERO problems. Me, I lost the better part of a day trying to get them to work. No wonder I have phobias about dealing with any equipment! Plus, yesterday I got pulled over by the cops. Yes, I know, "Brendan doesn't drive, does he?". Because of the extreme cold weather, we'd gotten a Zipcar for an hour in the morning so I could drive The Wife up to her work and not have her standing around in -45° windchills waiting for the bus. We were just headed over towards the Drive when I get blue flashy lights in my rear-view mirror. I pull over, and the cop comes up and tells me that I'm driving with expired plates. WTF? Frankly, I'd have NO IDEA how to even TELL if the car I was driving had "expired plates". We explain that it's a rental, but he's insisting that I'm responsible for the car. Come, on, WHO DOES THIS SHIT HAPPEN TO??? Since I was evidently clueless, and when he wanted to see the contents of the glove compartment it was all Zipcar stuff, he sent me on my way with a warning, but REALLY? How did he even know the plates were expired? Bleh. No wonder I hate cars so much.