Long-time readers of this space will no doubt remember when I used to write a LOT of poetry. If I recall correctly, I quit writing (it was a conscious decision due to the NLP-like feedback loops of depression that were involved) sometime after 2004 (my files are iffy past 2001), but for a long time I wrote a whole lot.

Here's a count from when I was obsessively keeping track:

After I'd formed Eschaton Books back in 1993, I also "published" (about 20 books, run on the copier and comb-bound) yearly collections, and it occurred to me that I had an itch to get these (and others) out there again, rather than have this mass of material slowly fade away.

I'm pretty sure that I have hard copies of everything (at least all the older stuff) in yearly 3-ring binders (OCD much?) in a box in a closet here, so worst comes to worst, I can scan/OCR/edit them in ... I am a bit nervous that I might have left the later ones sitting on a hard drive (rather than the floppies), which might or might not still be accessible. 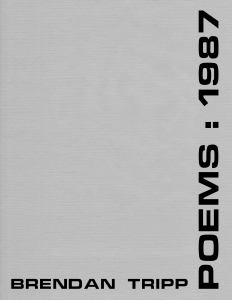 I have been working on this project for a bit. While I have the pages and covers (see over there ===> for a sample) and stuff designed (I'm planning on using Amazon's "Create Space"), most (possibly all) of the files are in the ancient PFS:Write format, which until recently was VERY hard to extract without the program. Fortunately, recent versions of MSWord will open them, and simply display all the associated code in blocks above and below the content, so it's a matter of selecting a block of poems, clicking on the import code box for each, going into the file, highlighting from the start of the document to the title of the poem, deleting that bunch of code, then highlighting from the date of the poem down to the end of the document, deleting that bunch of code, and hitting "save as" and clicking on the .doc option. It's a bit less than a minute per each. That's the good news, of course, the bad news is that there are hundreds and hundreds and hundreds of files requiring this, all in a very repetitive grind. So far I've gotten six years' worth done.

Had a discussion last night with a co-conspirator who was encouraging me to get books out as I got the component elements done. MY intention on this was to get ALL the poems pulled together and useable (i.e., converted to .doc), before starting in on the actual books, but he thought that was an invitation to never getting the project finished. My counter-argument was that I would really prefer to start at the beginning with a POEMS : 1976-1980 (123 poems), POEMS : 1981-1982 (260 poems), and then into individual years with POEMS : 1983 (200 poems), rather than "starting in the middle" with the 1986-1998 collections for which I'm likely to have files ready sooner.

Am I being way too obsessive about this?

Honestly, I'd had this project in mind for a very long time, but it had pretty much been put off to "something to ask my daughters to do after I'm dead" until I did some consulting with an author last fall. My previous experience with print-on-demand had been first in its early years, when it was painfully expensive, and the end product was so-so, and then with Lulu.com (which is still painfully expensive). This fellow, however, had put out his book (which he was using for a textbook in classes down at U. of C.) through Amazon's "Create Space", using their basic templates and options, etc., and was telling me how remarkably inexpensive the copies were ... and, frankly, they weren't much more per unit than what I was paying back in the day from a regular printer at the 5k quantity rate. This put the idea back into my head, since the costs of the one of my old chapbooks that I'd re-done at Lulu was MORE than it initially sold for ... and I figured if I could get these done at a decent cost per copy, they wouldn't have sell for a price that nobody was likely to be wanting to pay (not that I have any delusions about people being interested in buying poetry).

Anyway ... I noticed that I'd been pretty quiet here, and figured I'd check in with an update.