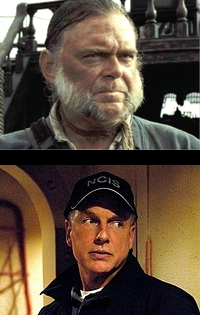 OK ... I've had this percolating up there for quite a while, and I have a hard time imagining that I'm the ONLY person to wonder about it.

Wouldn't it be cool if they could write a NCIS episode in which the subject of Leroy Jethro Gibbs' ancestry came up, and somebody (probably wouldn't be him) would mention that "he was descended from a British naval officer, gone pirate, Joshamee Gibbs" (Jack Sparrow's XO in the Pirates of the Caribbean films)? They could use the book supposedly written by the pirate Gibbs (a bit of Disney marketing) as a way to raise the issue.

Of course, to make this happen, Disney and CBS would have to "play nice" on sharing intellectual property, and I'm not sure how easily that would work ... but it wouldn't be the only time that they've dug into other network's IP. There was an NCIS episode when Kate asks Gibbs what Ducky looked like when he was younger, to which he replied "Illya Kuryakin" - the character that David McCallum had played in the mid-60's NBC series The Man From U.N.C.L.E. (promo pics from which are featured in Ducky's file at NCIS).

Again, I can't be the only person that thought of this ... but as far as I can find, nobody else has raised this issue out there. It's amusing to think that somewhat-renegade Naval (Marines) officer L.J. Gibbs could be a descendant of Naval officer turned pirate J. Gibbs!