This sucks so bad.

I have two external drives, one 1tb and one 2tb. I'd had various systems crashes over the past 5 years or so that were based on the main C: failing, so I'd recently been in the habit of keeping all my FILES on the external drives, primarily on the 2tb drive. 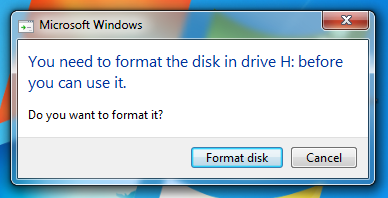 Well, this morning I had one of my infrequent (yet frequent enough to be a pain) videocard-based crashes (I don't know what it is, but this card "gets the vapors" when either it's loading in a lot of graphics, like scrolling through Facebook or Flickr, or signing in on accounts) and when the system came back up, I couldn't access the 2tb drive ... and it was doing some strange stuff in terms of flickering lights. I've tried rebooting with it plugged in, rebooting and then plugging it in, etc., etc., rinse & repeat ... and in every case, I get the same result - while it sees that there's a drive connected, Windows is coming up with that less-than-encouraging message over there ===> about needing to format the drive.

Since I have EVERYTHING that I've been working on for the past couple of years on this drive ... plus ALL MY DIGITAL PHOTOS FOR THE PAST SEVERAL YEARS (made more desperate because the original SD cards have gotten screwed up) ... the last thing I want to do is to FORMAT the drive and wipe everything on it!

A few years ago I had to retrieve data from a failed C: drive and found a guy locally who was able to do that for me quite reasonably. Unfortunately, when I contacted him about this, it turns out that he had the tools necessary to work with a C: drive with the OS on it, but not an external drive. He basically said he'd be in the same place with trying to coax it into talking to the system.

DOES ANYBODY OUT THERE KNOW OF SOME "REASONABLE" (most of the stuff I've seen is priced to soak corporations for data retrieval) OPTION FOR GETTING THE DATA OFF THIS DRIVE???

I could use whatever help I can get, since not only do I have years of work on this drive, but I have about five years of pics of my kids that I now can't access. I'm kicking myself for not transferring those off to CDs (one of those many, many items on my "to-do" list), but at this point I'm feeling like there's been a death in the family.