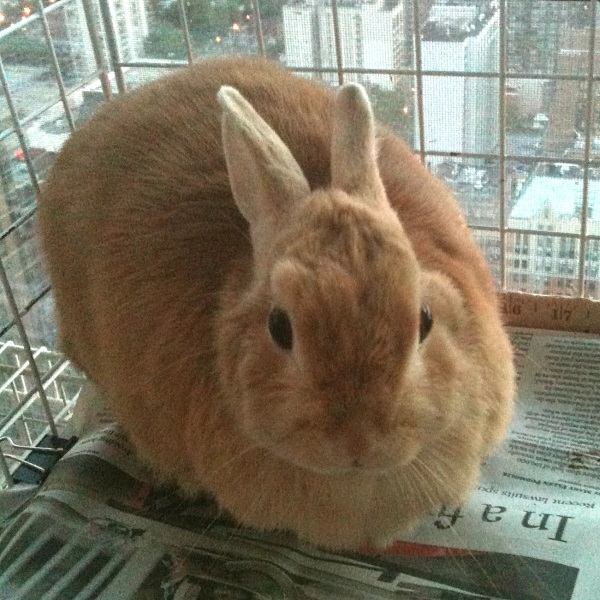 I think this is it for us having small furry critters (who aren't kitties ... The Wife likes having kitties). Our "rescue bunny" Thumper (no, we didn't name her that) died yesterday. She'd been having some issues for a few weeks, but was not in any evident pain or noticeable discomfort, so we figured she'd get better (our current theory of what was the problem was that in one of her ill-advised leaps from a person's arms towards her cage, she may have caught an edge or something and was having internal bleeding) ... but the day before yesterday she was a bit lethargic, and before we could pull the trigger on getting her in to a vet, she was gone. Sad.

Thumper was a fairly young rabbit, only two or three years old. One of my younger daughter's friends had her as a pet for a while, and we had her as a guest for a few weeks while said friend was on vacation. This was just after the last of our guinea pigs passed, and so she was sort of slotting into that "critter" category in our house. It turned out that the extensive vacation that the gal was on involved scouting new housing, and when Thumper's owner returned, one of the things on her to-do list was to find a new home for the bunny. Initially we weren't interested, but as time went on, it appeared that the only people she was finding who were interested in taking Thumper had recipes in mind.

It's interesting how animals can "catch the drift" of what's going on around them, and Thumper was getting more and more depressed looking as that "new home" search went on. Eventually The Wife decided that we'd keep her, and Thumper's mood improved dramatically. As I no doubt mentioned in here, I got supplies and re-worked the old guinea pig cage with a "second story" and space where Thumper could, if she felt inclined, actually stretch up to her full height. She'd had a ledge in her old (much smaller cage) which let her watch stuff going on around her, and she obviously appreciated having an "upstairs" where she could see everything (as you can tell from the picture here, she had quite a view!).

Thumper had evidently not been sufficiently potty-trained as a young rabbit, and would frequently end up with a mass of turds stuck to her butt/tail. I ended up being her rescuer on that, being the only person here who was willing to spend the time with the bunny's butt in warm water, massaging off the encrusted poop. Fortunately, she didn't mind having her back end immersed in warm soapy water (I hate to think of how that would have worked if she was fighting it!), so every few weeks we'd schedule "bunny spa time", and I'd be hanging over the big sink in back, holding her vertical with one hand, and working off the clumps of poo with the other. You could tell that she appreciated the effort.

It was probably due to these interactions that she was far less defensive around me than almost anybody else. Bunnies are fairly territorial, and I've read that they're worse than cats for introducing strange critters ... they have (in the words of Monty Python & The Holy Grail) "great sharp teeth" and can take a chunk out of you if provoked. Whenever I'd reach into the cage, however, she'd only make a defensive gesture (a tiny lunge forward), a far cry to the serious version where it was a lunge with claws and teeth.

I don't know if it's all bunnies who do this, but she had this one thing which I assumed was a mark of affection ... if she liked you, and you put your finger into the cage, she'd come up and rub her chin on your finger, which was very sweet. She also liked me because I'd share little bits of my dinner ... she liked anything that was crunchy - over-done french fries, corn chips, pizza crust - and was always appreciative of a little nibble (we're talking tiny bits here, quarter-inch pieces, etc.)

Her fur was so soft, and I was surprised that even when dead, she was "pettable", but I guess that shouldn't be a surprise, as rabbit fur has been a trim or lining item in clothing for millennia. There is a vet's office a couple of blocks from here that handles small critters, and I walked her over there yesterday afternoon to arrange for cremation. One of the assistants there had worked a lot with rabbits, and she was even petting poor dead Thumper ... going to miss that bunny!