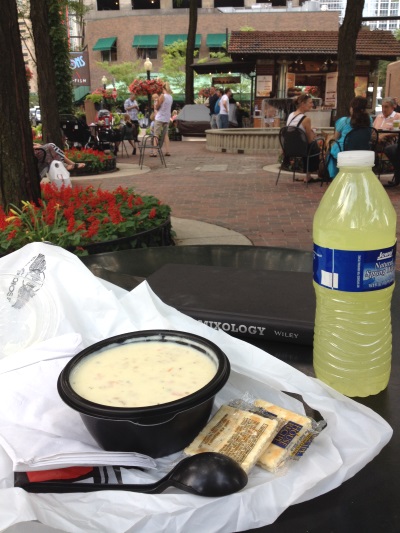 I'm sort of a freak ... {but you KNEW that} ... in terms of how I relate to sensory input. Back when I was trying to get some traction with network marketing, I was coached to try to, essentially, "cold read" prospects and figure out what their "sensory mode" was, and then focus my pitch on whatever they were wired for - Visual, Auditory, Tactile, or Olfactory. I was never any good at this (some have posited that my paying sufficiently close attention to what somebody else is saying to get that info is outside my range of interpersonal interaction), but it did lead me to wonder what MY "sensory mode" was. After much reflection, I came up that it was based on taste, which has been suggested to me to be a mutual subset of tactile and olfactory senses. In my life, there are no pleasures quite so sublime as culinary pleasures.

This is not particularly surprising, having grown up in the food industry (at one point I was credited with having almost "photographic recall" of the flavor profiles of thing I'd eaten), but it seems to be a far outlier for how people relate to their worlds.

Of course, back when I was doing PR for blue-chip consumer food product clients, I had the pleasure of eating at restaurants on almost a daily (and frequently multiple times a day) basis. And ... well, one of the main things that has exited my life over the past decade or so has been my ability to indulge in restaurant meals. We've been so broke for so long, that I feel guilty getting 2-for-$2.50 hot dogs (with ersatz chili and cheese) from 7-11 ... and regularly refuse to go out with my family on their weekly Chili's outing, since I don't want to "waste" $15-20.00 (between food, beverage, tax, and gratuity) on food that I'm not particularly interested in eating.

So, it is a MAJOR act of self-indulgence if I actually go and spend money on something for lunch (as opposed to having a couple of hard-boiled eggs or something at home). However, today is Friday, and on Fridays Lou Malnati's has an exquisite clam chowder, a bowl of which can be had for under four bucks all told. I had wanted to get some reading done this afternoon, so I blocked out time starting around 1pm, got a to-go order of the soup (bringing my own beverage from home), and headed out to the park (that's Mariano Park for those of you who don't follow me on Foursquare/Swarm ... which is right across from my building). What bliss!

I don't know what it is, specifically, about Malnati's clam chowder that I like, but they describe it as "old style" ... it's thick, creamy, full of lots of clams, and has a closer profile to a cream soup than to a "fish soup", with a bisque-like finish. There are several "star items" on various menus that keep bringing me back to places, and this is certainly one of those. Anyway, between the soup and my beverage (dollar store drink mix, baby!), lunch came to just under $4.00, so I didn't have to beat myself up too much for the spendy indulgence.

Needless to say, this all underscored to me what a cruel unrelenting Hell I've been living in since my employment situation fell apart all those many years (and thousands of resumes) ago. There is never anything good that doesn't throw a light on all the bad, but that's what it's been like in my head forever. (sigh)