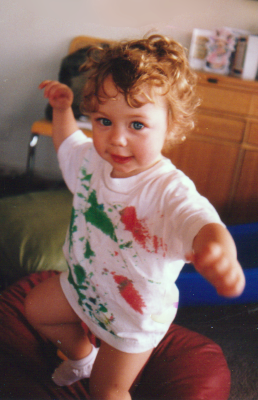 Ah ... that little girl over there ===> is going off for college this morning. Of course, that picture is from a long time ago, but on some level, that's the mental image I have of Daughter No.1 (especially as that's the picture I use to take with me when I was on business trips).

She grew up to be a brilliant young lady (she's starting, as an incoming freshman, in Caluclus III in one of the country's top Electrical & Computer Engineering programs), and is quite eager to get started with her college education. However, it only really struck me in the past week that she wasn't going to BE HERE any more except for on vacations, and that very soon she wasn't going to BE HERE at all. And, I'm not processing that data point particularly well.

In our society, having a baby head off to college is pretty much like the fledgeling getting nudged out of the nest to start using those flight feathers. But there's no ritual to it ... it would be nice if we had a structured pathway to take all parties through the process.

I think ritual is the one thing supporting organized religion. People need ritual, and they'll put up with all sorts of cognitive dissonance over plainly ridiculous mythologies to get it. I keep thinking that the world needs a non-religious "religion" ... one that won't ask you to believe absurdities (as Voltaire phrased it), but will provide you with the spiritual/emotional structure that the lower mind requires.

It was almost as if the Universe was trying to help me through this process this morning. I got up and turned on the BBCA channel, and there was a science show dealing with in-vitro fertilization. Daughter No.1 was a product of the advanced IVF procedure "ICSI", which we ended up being able to get because The Wife at the time was an administrator at one of the hospitals that were running experimental tests of the system. The serendipity of having this "look back" to No.1's beginning on the morning that we're driving her off to college was notable ... hence my making a note of it in here.

(Sigh) ... Daughter No.1 is my favorite among all the human fauna on this planet (well, Daughter No.2 is right up there too), and I'm sure going to miss having her around. Thank goodness for Skype, FaceTime, and Google Hangouts!