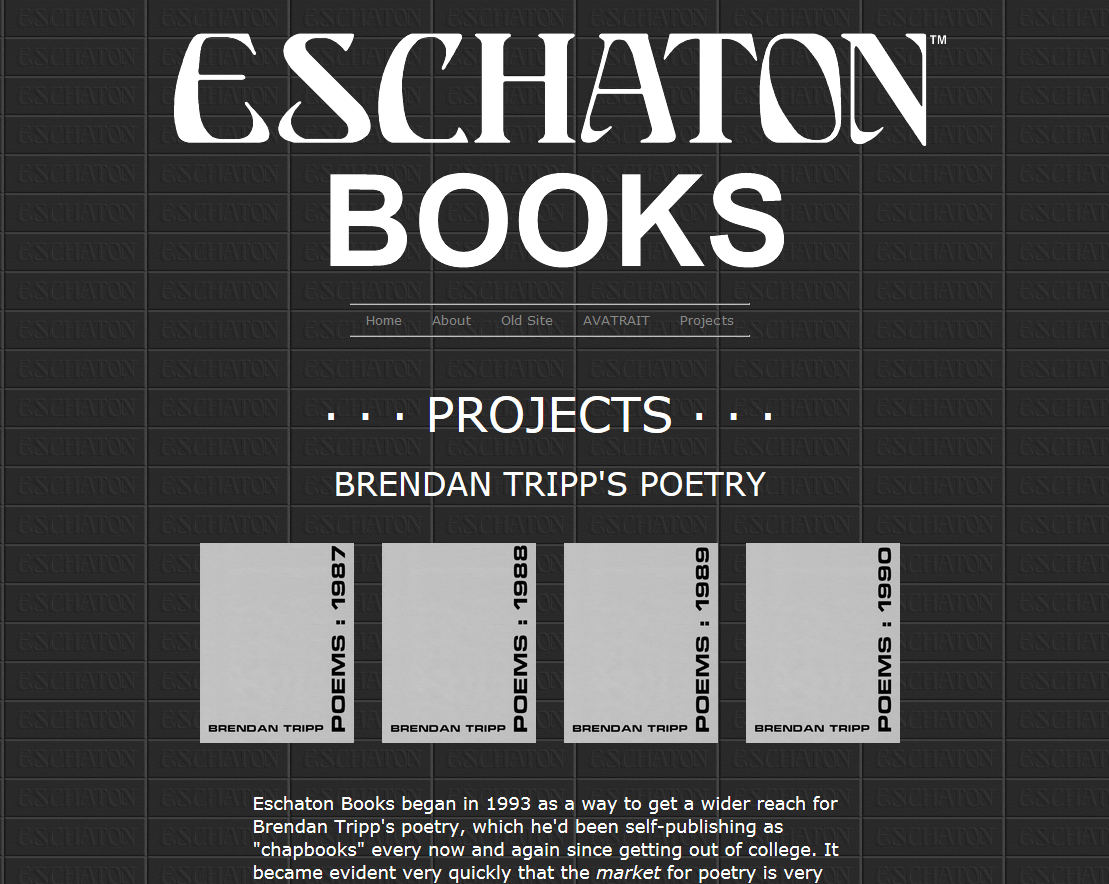 As long-time LiveJournal readers may recall, I used to write a LOT of poetry, and in the early years of LJ (the later years of my poetry writing) I'd post most of it up here, with the occasional audio of my doing readings.

From about 1976 to 2007 I wrote in excess of 5,000 poems, with at least a dozen years featuring 250 poems each. Back in 1993 I'd started Eschaton Books to, initially, serve as a vehicle for publishing the little collections ("chapbooks") that I'd been putting out every now and again since the early 80's. Of course, my first "lesson" from Eschaton is that pretty much nobody actually BUYS poetry collections (unless they're forced to in a classroom setting, or pick up a book as a "souvenir" at a public reading), so we quickly "pivoted" from being a poetry press dedicated to my scribblings to being a "metaphysical publisher" which had a bit more market.

While I continued churning out the chapbooks every couple of years (representing what I considered "the best 10%" of a two-year 500-poem output), I never made an effort to push out the whole of my writing - largely due to the costs involved. At the end of every year I did a 12-copy edition of xeroxed and comb-bound collection of that year's poems, primarily to secure copyright, and to get it into the hands of key friends and relatives ... but back then there never was an affordable way to get the mass of poems I'd been generating "into circulation".

Well, now with things like Amazon's "CreateSpace" service, that's changed, and I can get nicely produced professional-looking bound editions of my work out there for no upfront costs other than about 12 hours of my time spent designing, setting, and proofing the books (actually, that is probably closer to 18-24 hours, as I've needed to extract the file contents for each poem from the long-abandoned .pfs format and into something currently readable ... this used to be a bigger issue, but the more recent versions of MS Word will open those files as an ASCII import, and I then just have to strip out the code from around the poem - a pain in the ass, for sure, but better than trying to scan and do OCR on thousands of sheets ... and before jumping into the current publishing push, I'd spent many nights over at Starbucks with my netbook with Word on it, converting years of old files into a format that I can then just cut-and-paste into MS Publisher).

I also resurrected the Eschaton Books site ... again. Long-time readers might recall that when I was Director of Communications for Simuality/Liminati back in '08 and into '09, I'd shepherded a line of art books out (via LuLu's print-on-demand service) for the Avatrait gallery in Second Life, which we'd used the Eschaton ISBNs and name for. Unfortunately, that site was on the Simuality servers, and when they went out of business, the site evaporated, and over time (and hard drive crash after hard drive crash), I ended up losing track of (or just plain losing) the component files. So, I ended up re-building the site from the fragments I had into what you'll see at the current SITE ... unfortunately, the OLD Eschaton site (with our original books) seems to have totally been lost, which has forced me to go digging around on Archive.org and grabbing page after page of old code, which I'll eventually use to re-build that "museum" presence on the new site.

Yes, this is a bit of an "ego thing" ... but how many other people do you know who have written that many poems? Also, every time I get into reading this stuff I'm reminded of how much I, at least, like the poetry I wrote ... and I hate the thought of this all slowly fading to non-existence on the various floppy disks that currently hold the files. Of course, the "simmering pit of angst, stress, and rage" that informs my poems is not for everybody ... but it occurred to me that the growth of Death Metal, Black Metal, and assorted related genres might have opened up an audience ... and possibly provided a market for which my "bleeding out on the page" poems could be adapted as lyrics!

Currently, if you're looking for samples, you'll have to deal with the "look inside" feature over on Amazon ... but I'm going to be adding ones on the site eventually (hey, there are only 168 hours in the week!), and possibly with some new reading files (I have a number over on YouTube that I could link to, but they're not "of the vintage" of the books yet).

Oh, and there will eventually be Kindle editions of the books, but it's SUCH a pain in the ass formatting (or de-formatting) for Kindle that I've not been able to get one through there as yet. The new books have a particular "look" to them, involving a background graphic on most pages, and I can't do that on Kindle, so I'm trying to figure out some way to make it "more interesting" than just plain text-on-white there, but it's time that I'd rather spend getting more titles out. Maybe I'll just make the .pdf source files (or CreateSpace galleys) available through the Eschaton site.

Anyway, this is HUGELY important to me (in a morbid sense, this is something that I was always holding out for "getting my affairs in order" before taking the dirt nap), and I hope that folks will consider checking them out.