I caught a couple of minutes of Mad Men this morning ... and this was there:

Don Draper: "We're going to sit at our desks and keep typing while the walls fall down around us because we're creative - the least important, most important thing there is."

I'm not even sure what the context was (except it sounded like the agency was in deep trouble), but the thrust of it was very much like my days. I have almost no "pattern" in my week, spending 12-18 hours at my desk every day, every day, every day - with the occasional networking event getting me out of the house, or the couple of hours each week that I manage to go out to the park to get some reading done. I work on web sites (the new TJ section of EschatonBooks.com is going to be unveiled soon - I just need to change the site and internal link structure for the existing pages), I write blogs (my own, my reviews, Green Tech Chicago, and those few that I actually get paid for), I do PR materials and web outreach for Nature's Little Recyclers (I have a release going out today), I read site after site of "industry info", trying to keep up on a dozen or more areas that I might end up working in, and, of course, I research jobs and crank out resumes on a weekly basis.

Unfortunately, all this "massive action" brings in only a drip-drip-drip of income, and we're faced with "the walls falling down around us" (almost literately at the moment), because of it.

There's a popular adage that I've had thrown in my face more than once over the past few decades, initially attributed to Albert Einstein: "Insanity: doing the same thing over and over again and expecting different results.", but I've run out of ideas of DIFFERENT things to do. Over the past five years, I've sent out somewhere between 2,000 and 2,500 resumes and have managed to get less than a dozen actual interviews from that, and (obviously) no on-going jobs. Do I stop applying for jobs? I get nearly zero money from my writing and other efforts, do I stop these activities?

I have skills spanning the whole "communications" spectrum, from graphic/design/photo chops, to audio/video skills, to writing in numerous contexts, to event planning (hell, I used to be a CMP), to editing and book development, to general management. But none of that seems to matter. In the current work market people are looking for particular gears to drop into particular slots in their machine ... the "ninja", the "rockstar", the "one trick pony" that's good for one function, and can be swapped out for the next hunk of meat as needed. I'm more a "swiss army knife", with functionality across a wide range of activities ... but it seems nobody needs that any more.

And now we're over the edge of the financial abyss ... and all I can foresee is that I'm going to "sit at my desk and keep typing" as long as I still have a desk to sit at.

What a nightmare. What a waste.

This is another book that I reached out to the publishers (in this case, the good folks at McGraw Hill) to get a review copy. Cheryl and Mark Burgess' The Social Employee: How Great Companies Make Social Media Work sounded interesting, and I figured that it was something that would fit in with the general arc of my reviews.

To be honest, I was a bit worried in the early chapters here that I'd been “suckered into” something, as the Burgesses are the principals of Blue Focus Marketing®, and that “®” is, along with their “™'ed” model, all over the introductory material here, and I was thinking “oh, great, another long-form commercial for somebody's company”. Fortunately, the pitch parts are largely limited to chapters 2 and 16, and the rest of the book not “branded”. 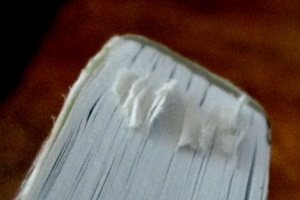 Now, as regular readers of my reviews may recall, I have a system of using little bits of paper as bookmarks to get back to particularly interesting parts of a book – either for my own reference or for quotes for these reviews. While there isn't a “standard number” of these, I can recognize when there are more than average, and I found in excess of a dozen here (see pic ===>) … so there was a lot of stuff that I found worthy of marking.

The book is in three sections, an introductory one which sets up the “social reality” and how it is, in the broad strokes, effecting businesses. The authors present their model for addressing “social employees”, “social executives” and “social customers and prospects” in this, but don't beat the reader over the head with it … and ultimately the take-away from this is that they're essentially defining their perspective, as a ground for what comes later in the book. There are several lists presented in various sections, and one here is particularly interesting: “The Six Most Irrational Concerns of Brands”, which is something of a cheat sheet for pushing Social programs on hesitant upper management, as it answers many of the points that would be holding them back from being on-board with these. It is also in this section that they start to define what they mean by the “social employee”:

Today's consumers expect online engagement with brands, and they expect to be engaged in an authentic manner. Consumers don't want to speak to a brand; they want to speak to real people. The rules of engagement for interpersonal interaction between social employees and customers are still largely unwritten. It is a certainty that employee voices matter, and that a brand's reputation depends tremendously on how well its social employee representatives communicate with the outisde world.

This role is further defined by another list: “Seven Characteristics of the Social Employee” -

The second section of the book, which is likely to be the “meat” of this for most readers, takes a remarkably detailed look at the social programs of a half dozen major corporations, IBM, Adobe, Dell, Cisco, Southwest, and AT&T (plus a couple of others that I'd not heard of). One thing I did note here, these are all (minus Southwest) tech companies, which might be logical in that they'd be presented with more organic opportunities to “go social” than companies in other niches. It would have been interesting, if just for variety's sake, if the authors had tracked down some other sorts of companies who were “doing it right” (I'm recalling Gary Vaynerchuk's Jab, Jab, Jab, Right Hook as a source for numerous examples), but the focus here is very much on these tech big boys.

One of the fascinating aspects of this survey is how differently this group of organizations went about addressing the social marketing impetus within their ranks. I was particularly interested in reading how IBM approached this, as they still have a rather “starched shirt” image, and one would not suspect that they were particularly eager to cede control over company messages, yet:

Although expected to follow IBM's guidelines, employees' social activities are not centrally managed. This allows authentic dialogue to come about organically. According to IBM, over 400,000 employees engage the public, clients, and customers either through IBM-owned platforms … or external platforms ...

That's nearly a half a million voices … with 26,000 individual blogs, 62,000 wikis, and communications traffic generating a whopping 50 million instant messages per day – all on their internal system. Add to this hundreds of thousands of Facebook, LinkedIn, and Twitter accounts, and that's a lot of company presence.

The section on Adobe is interesting in how they evolved over time. From a “centralized” model, they moved to “distributed”, to “coordinated hub and spoke” to a “holistic” model. They've implemented what they call a “guardrail” approach for corporate guidelines for social interaction by their employees. Another “look under the hood” availed the reader here is a fascinating chart that maps social KPIs to businesses objectives as a model of how they measure their social results.

The section on Dell deals with their Social Media and Communities (SMaC) group and their “university” social certification program. This program was envisioned to train 1,000 employees over a span of six months, but that had been exceeded within the first month – indicating the level of interest among the employee population.

In the Cisco chapter, there's an unusual focus on process … and this is charted out in a “WWHW Wheel” (What-Why-How-When) which tracks employee buy-in through awareness to understanding to belief to action and to outcome, with more than a dozen steps in between.

I wonder why AT&T is in the mix here, as they get a mere 4 pages discussing a blog program they'd implemented … given that all the other companies had much more material, it seems that this could have been edited out without lessening the book at all. Perhaps they're a current or potential client of the Burgesses and they didn't want to have them feel slighted by being left out.

The third section of The Social Employee is something of a guide to implementation of what's gone before in the book. First looking at the “social executive” and what is involved in that role (including a list: “Seven Personalities of a Social Executive”), then on the need for educational support for training social workers, and look at various current platforms. The penultimate chapter deals with Content Marketing, giving examples of where this was done right, and another list, “Components of a Good Story”:

Those last two largely encompass “shareability” and the concept that “your content should leave the consumer in a different place than where they began”. The book finishes up with their branded (“®”/“™”) “10 Commandments of Brand Soul”.

All in all, this book is a fascinating read in how it gets you inside these companies to see how they're managing large populations of employees. Unlike some other books aimed at company leaders, this doesn't have that “it won't do me any good because I don't run a big company” vibe - no doubt due to the “voyeuristic” aspects of getting to peek into the feature companies. The book has been out for a bit over a year at this point, so copies have worked their way into the used channel, but I'm guessing this can still be found in the business-oriented brick-and-mortar book vendors. Obviously, this one isn't for “all and sundry”, but if you find social media on the corporate level attractive, it's definitely something you should consider getting.