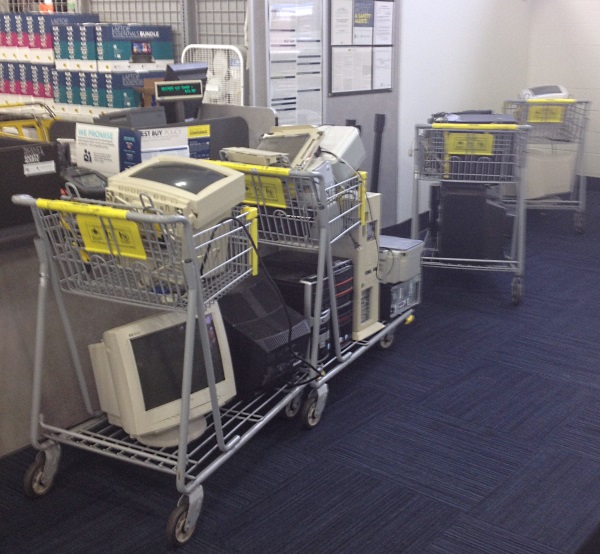 Folks who know me, know that I rarely throw out anything that I might think would have eventual utility in some form (which, unfortunately, includes "costume elements", "sculpture or other art", and "MacGyver-esque emergency re-purposing"). Some accuse me of "hoarding", of course ... but I've always have considered it "respecting the former function" of equipment and tools, and being unwilling to callously cast aside what has been helpful in the past.

However, in our current state of having to drastically down-scale our living arrangements, The Wife finally won out on The Big Technology Purge.

The picture here shows a half-dozen computers, at least as many printers/scanners/faxes, and numerous CRT monitors and TV sets ... piled up in four Best Buy carts, awaiting their recycling fate. I must admit, Best Buy's program of just letting you drop stuff like this off for recycling works great ... we parked the UHaul van in their lot, grabbed shopping carts, loaded them up, and just parked everything over by their customer service counter. No hassles at all.

We'd also loaded up a lot of my old Eschaton Book shipping supplies, and ran those down to Nature's Little Recyclers (who, by the way, just had a nice piece in the Chicagoist), which may be used to ship stuff, or may be used to feed the worms.

Anyway, I wanted to note the passing of a lot of my stuff, some of which (like the large TV) have been with me for as much as 30 years (also note the big tower case ... that was my first "powerful" computer - with a 386 chip! - from nearly 20 years ago).