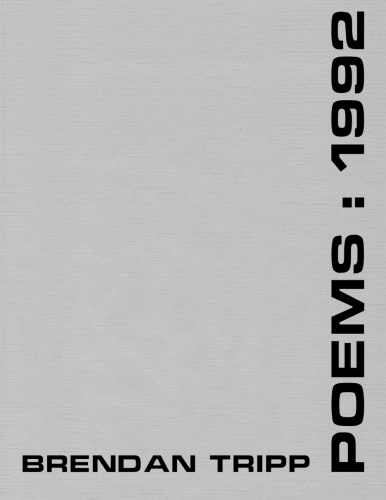 But, I couldn't let some 5,000 poems written over three decades just evaporate, which they certainly would have if not "rescued" from the old outdated word processing format files on old floppies (and, frankly, I'm worried that I might end up with some "gaps" due to computer crashes where things lived just on the HD). I know I have about 10 years' material good-to-go at this point (where I'd sat down at Starbucks and opened file after file as ASCII imports into Word, trimmed off all visible code, and then saved them as .doc files), and with this ===> edition, I'm up to having six of those years' worth of poems (250 poems per year, so that's 1,500) available for anybody on the planet to order via Amazon (or direct through Create Space).

I have files from 1976 through 1997 (which I'd done small-edition comb-bound collections of back in the day), and I know that I was still writing up to 2007, as there are poems from back then posted in here. I think only 13 of those years had 250 poems each (although I may be just suffering from data deficiency - my OCD records of my writing seem to abruptly stop in 1997, although I was still putting out poems a decade later), and those will be the core part of this series, obviously.

While I'm likely to still be doing other stuff with the Eschaton Books site, it's largely set up at this point for handling all these new poetry editions. At the moment, I only have copies of the first one of these I did (1987), but they're pretty impressing, 8.5x11" perfect-bound volumes, nearly an inch thick ... when I get the whole set pulled together there should be 20 or so volumes (depending on what I find my output was for 1998-2007), taking up a fairly impressive amount of shelf space! Once I get done with that (or hit some snag, like having to scan printouts of the poems and churn them through OCR processing), I'm going to do a volume that has all my old "chapbooks" in it ... which will be an interesting project (especially dealing with the ones which have art in them).

I'm also planning on adding some "multimedia" ... I have a number of "readings" that I did of the poems a while back, but only a handful of those are currently "out there", in my YouTube channel. Additionally, "back in the day", I did reading tapes of at least a couple of my chapbooks, and I think I still know where the "originals" of those are (on cassette - glad I bought an external cassette drive a while back) which I'll then convert over to "podcasts".

Just give the cover there a click and check the 1992 book out for now!