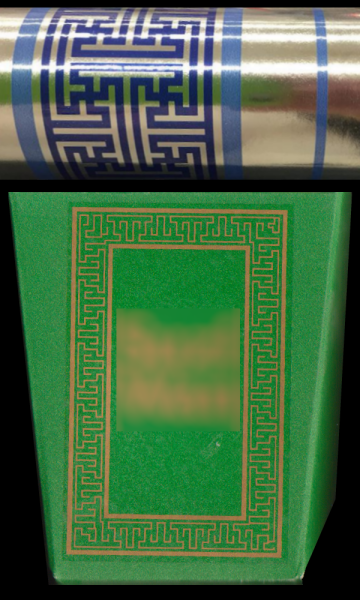 I was interested to see that kerfuffle which erupted over the past week or so regarding some Hanukkah gift wrap being distributed through Walgreens stores which, quite arguably, was covered in swastikas (see upper part of image). Quelle horreur, n'est ce pas?!

Of course, accusations of vile conspiracies started flying all over the internet, with the general tone being that there was no way that these swastikas could have possibly gotten onto wrapping paper for the Jewish holiday without somebody intentionally being anti-Semitic or worse.

However, I went through something VERY similar a quarter century ago back in my PR agency days.

Now, in high school we learned of Greek "key patterns", which are similar to other geometric ornamentations from the Middle East and China, where they'll frequently appear in screens, etc. If you are working with short lines and right angles, it is, frankly, difficult to not end up making elements that we would today recognize as "swastikas" ... however, you really DO need to be looking for those swastikas (or at least "sensitized to" the pattern) to see them. Plug in "key pattern" into a browser and you don't have to look very far to start seeing swastikas, such as in the labyrinth fret shown as an example over on The Free Dictionary page.

Anyway, back in the day, one of our clients was a division of one of those global megacorp food companies (whose brands you no doubt know and in many cases probably love) that we'd had a long and happy relationship with. They were launching a new line of Oriental-themed side dishes, and we were doing the PR for the U.S. introduction. Now, consumer-product PR, especially in the food niche, is "low man on the totem pole" for most decisions for stuff like product packaging, etc., so one day a bunch of cases of the new line show up in our office, all featuring an Oriental "key pattern" which was very close to what was on that Hanukkah wrapping paper. In high school I had been a "military history" buff and read dozens of books on the Second World War, so when we pulled out the new product, the first thing that *I* saw was the "row of swastikas" running across front of the box. Of course, once I pointed this out, everybody else on the team saw it too.

However, for that particular pattern to make it to these printed boxes, that design had gone through layer after layer of approval on the client side, with dozens of sets of eyes involved in determining how that product was going to look, and, evidently, nobody had "seen the swastikas" before me. Needless to say, the client was mortified when we ever-so-gently suggested that having swastikas on the box might not be the best visual approach to marketing the product line ... and pulled the existing boxes, and had the pattern re-designed to that which you can see on that green promotional to-go container we did for a series of press events (and yes, you should be impressed that I was able to find that piece three decades later ... my office is a mess but I know where most of the stuff is within that mess!).

In the pic, I've blurred out the product name, as it appears to have gotten traction in the European market after a so-so run over here, and I'd hate to be seen dragging the product line, division, or parent corporation "into the fray" about the wrapping paper.

But, obviously, my point here is that it is QUITE possible that the Hanukkah paper was just seen as a "Middle Eastern design" by everybody who looked at it through the course of its development and approval. Needless to say, both sides of the hubbub over this have valid points (on one hand, everybody is so over-sensitive about possibly upsetting people, on the other hand, having six million or so murdered under a flag with that symbol "leaves a scar") ... and it's unfortunate that nobody "saw" that before the paper was produced and on the store shelves.