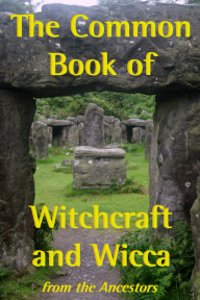 Really, really, really, I did not re-start Eschaton to "get back in the publishing biz" ... I just wanted to "save" my old poems from disappearing into to a void of magnetic dust shedding off of 5.25" floppies. However, once I got back into the "hey, editing and lay-out is FUN" mode, stuff stated showing up ... including a project from the folks over at WitchSchool (who have been "old friends" of Eschaton, dating back to our very first non-poetry release from the 1993 Parliament of the World's Religions, and our first "multimedia" release of a set of disk-based clipart).

As I've no doubt kvetched about before ... the reason that I've not been too keen to get back into the publishing biz is that it's a brutal game, with only 2% of published books ever selling as many as 5,000 copies ... and if you're going to try to make a living at this stuff you're going to need to sell LOTS more than that. At least with the poetry, my expectations are pretty much that I'm going to sell nothing (expectations that have, sadly, so far been met with all 10 volumes that are available), so there's no psychic pressure to make those go out the door. However, if I had "commercial" projects in the works, I'd be back to hoping that we'd sell 10k ... which is delusional.

However, in the case of the initial release of "The Common Book", we're giving away a 400-page .PDF version, which has been, as the saying goes, "flying off the shelves" ... we did a "soft launch" on Sunday morning, and followed it up in the past couple of days with a push in social media and various WitchSchool lists. Just in the past 24 hours, thirteen thousand copies were downloaded ... plus, several WS-connected sites re-posted the file, and there's been much "passing along" of the (fairly large, at 5.62mb) .PDF document, so the numbers are no doubt bigger than that.

This means that this book has "moved more copies" that ALL the books ever put out by Eschaton ... in just a couple of days.

Of course, what I'm finding depressing about this is that I'm making nothing on those copies. I'd probably find that irritating even if I was doing this as a side-project to a nice six-figure MarCom job (how I wish!) ... but given the desperately strapped situation that we're in financially, it's really depressing (and The Wife is very, very angry with me about not getting one red cent so far for this).

I'm still not done with this project, as we still need to produce both a hardcover and paperback edition (it was set up through an IndieGoGo crowd-funding deal, and folks are due books from that), but it's so hard for me to see this huge quantity going out for free, when the logical expectation is that the eventual PAID copies will be only generating a percent or two of that in actual sales.

Anyway, click on the cover up there and you can have your own .PDF copy of it!