So, this was one of those books that I got wind of on-line and dropped a note to the publisher to request a copy. Fortunately, it's another title from the good folks at Wiley, who are always quite accommodating of my asking for review copies. 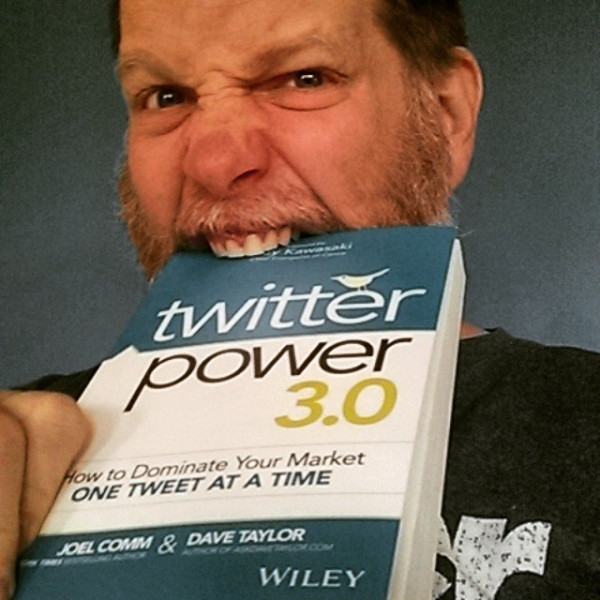 To be honest, I've been using Twitter for so long (over 8 years … I was one of the first 3 million users – out of nearly 650 million total users), that I wasn't particularly anticipating learning very much in this volume, but with enthusiastic referrals like that one ==> from Chris Brogan (click on pic for a bigger version … he seems to be enjoying it!), I could hardly have not opted to give it a read.

Now, Twitter Power 3.0: How to Dominate Your Market One Tweet at a Time isn't just a book about using Twitter, but about using it as a vehicle for building brands. In it, authors Joel Comm (who you may recall I've reviewed previously) and Dave Taylor both set up (quite literally – the first third or more of the book is pretty much step-by-step on getting a Twitter account going) Twitter for those unfamiliar with it, and delve into their recommendations on how to use it for business.

The book starts at about a basic level as one could ask for … explaining “social media”, and how that's evolved, and why it's important … then moves into looking at Twitter in the context of the whole social media environment. The book is extensively illustrated with screen grabs, so the reader doesn't have to use too much imagination to follow what's being detailed … and among these in the early bits is even a shot of the fabled “Fail Whale” … once a familiar and all-too-nearly-omnipresent “feature” of Twitter, now a semi-fond memory of the early days on the service (when was the last time you saw the Fail Whale?).

Some of the things that the authors coach their readers on are things like picking a name, and the ways that can impact things down the road … walking one through considerations that are well thought-out, and might have been missed by some “late adopter” deciding that it was time “to get on that tweety thing”). While I agree with most of the (very common-sense, really) material in this, I did have a slight disagreement with their blanket statement about putting numbers in your ID (ala classic AOL accounts) being “something you should really try to avoid”, with my counter-example (and, admittedly, this would only apply to a limited number of users) of Chicago Tribune's digital honcho Bill Adee having the rather clever Twitter handle of @Bill80. Perhaps the best part of the set-up chapters is how they walk the reader through the process as Twitter will present it, and suggest (sometimes quite strongly) things to skip (such as when Twitter wants to get into your email to let you know who's already on the service – which, if you use it right when you join, will result in a lot of contacts hitting your account, and finding pretty much nothing there … so this is a step they recommend holding off on until you're gotten some “there” there in terms of content).

In my opening above I noted that I wasn't anticipating learning much about Twitter in general, but I was wrong on that count. For instance, if you're needing/wanting to set up multiple Twitter presences, but don't want to be having to follow a whole slew of mail boxes (I am quite familiar with this problem), you can use one Gmail account for them all (!) … how? Well, Gmail ignores periods in the stuff to the left of the @ sign … j.ohndoe and john.doe are exactly the same to Gmail, however, to Twitter those are totally different addresses and will let you set up new accounts on what is (on the other end) the same email, just but adding those periods. Pretty cool. They also follow this tip up with some other interesting Gmail hacks (that I may use eventually).

One odd feature here is that they hand “the mic” over to a Matt Clark of a design company called TweetPages for the fourth chapter. While “bringing in an expert” is a laudable concept, the book already has two “cooks” and shifting over to a third voice makes that section stand out. I really think this would have been better addressed if Comm and Taylor had sat down with a half dozen designers working with Twitter (I'm sure there are hundreds of consultancies out there would would have loved to be credited here), and presented a “processed” take on the (no doubt variable) information on “Twitter Setup and Design”. This not to say that the material he brings to the book is trivial … I bookmarked a number of things for my own use here, including where Clark says that, even with your profile pic, you should pay attention to the SEO value of the element … he uses the example of re-naming “IMG43879852895.jpg” as “TweetPages-Matt-Clark.jpg” as something that takes just a few seconds but could result in noticeable increases in search traffic … and he provides URLs to a number of very useful things, from a tool that helps in identifying fonts, to one that will alphabetize lists, to another which suggests free (open source) alternatives to commercial software, etc.

If there's one thing that having the “guest” chapter does, it provides a “pivot point” for the book, as following that the book makes a significant shift in focus and tone, from the careful hand-holding of setting up one's Twitter presence, to nitty-gritty marketing advice on “Building a Following on Twitter” and “The Art of the Tweet”. Now, I have some additional caveats here … as so much of what they're talking about in these parts seem to me (who has been using Twitter for a very long time) as being “pie in the sky by-and-by” kind of results. I have never run, or been associated with a project using, a Twitter element that came anywhere near the sorts of following/responses/retweets that they talk about here. Maybe I'm “snakebit” when it comes to this sort of stuff … but this reads to me like it's the “1%” telling the hoi polloi how things work on their end of the world. I seem to recall that I had a very similar issue when reading Joel Comm's Ka-Ching (about running on-line businesses) five years ago … it sounded great, but represented results that neither I, nor anybody I knew, had ever been able to achieve.

The book then goes into “Connecting with Customers”, “Team Communication”, “Build Your Brand”, “Drive Follower Behavior”, and “Make Money on Twitter”. Similar caveats apply here … the theories seem sound, but I've never seen it work like this (an example: “out of 200 followers, your {tweet} generates 12 replies, and you can see by searching for your username that it also picked up four retweets” – I'm pretty sure there are lottery games with better odds than those sorts of numbers happening) … although the authors have had a great deal of success in Twitter, so I suppose are case studies in how it can happen. There are some tips in here, though, which are golden … such as following somebody you know is at a conference and the hashtags that are being used there to “virtually” attend. There have been dozens of conferences I wish I'd have been able to get to, that this would have been a great way to at least “listen in” to the chatter.

Twitter Power 3.0 closes out with some excellent additional useful info, with one section presenting a dozen third-party programs that work with Twitter, from the near-essentials of TweetDeck or Hootsuite, to things that follow trends or send alerts when selected key words are mentioned … and a final chapter that features five pages of Twitter accounts that the authors believe are key for marketers to follow from their own lists (and a Twitter newbie loading these in when getting set up would “hit the ground running” on good info!).

This is brand new, just out a couple of months, so you should be able to find it in the stores catering to business/internet books, and the on-line guys have it at about a quarter off cover at this point. I found this an interesting read, tempered by the above-noted caveats (my jealousy at their results?). Certainly if one was totally new to Twitter, this would provide a great starting point, and it has enough useful stuff in it to make it a worthwhile read to even “old hands” on the service.