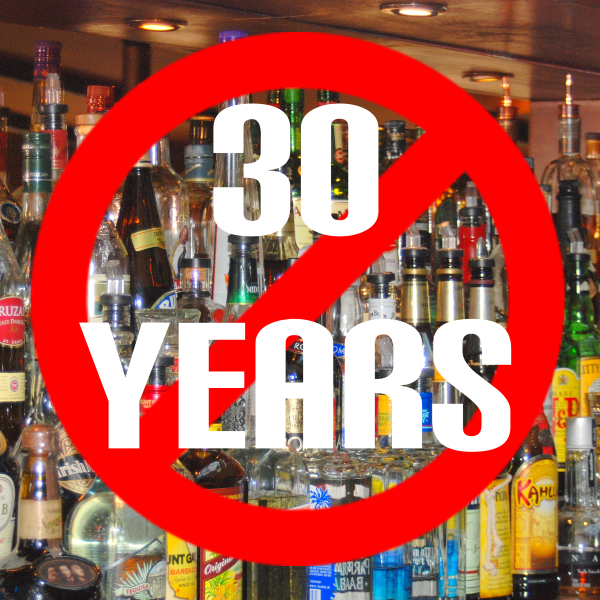 Well, today is my 30th anniversary ... of sobriety.

Yep. 30 years without a drink. I'd be off celebrating at an AA meeting tonight, but I present a conundrum to those folks, as they're thrilled to find somebody who has been sober as long as I have, but are frustrated that I did so totally without the benefit of their program ... so I represent a "bad example" to those struggling with alcohol, and I always feel a bit like an unwanted outsider on those rare occasions (which have only been in the past few months) when I show up at a meeting.

Those of you who knew me in my teens and 20's may find this amazing, because I was, if anything, an enthusiastic drunk. Of course, when I got into PR, there was the whole history of that profession with booze, which I certainly did my bit to uphold (including a bottle of rye whiskey in the bottom drawer of my desk, just in case the morning was too stressful to wait for lunch).

My dad (who died when I was 2, so I have this all second-hand) used to joke that my amniotic fluid was Wrigley Building martinis ... my Mom having been an executive with the J. Walter Thompson ad agency based there in those "three martini lunch" years (I must admit that I was sad when I saw Walgreens had recently taken over the old restaurant space), so I probably got an early appreciation for gin in utero. After my dad died, we moved out to New York, and I've joked that I grew up in "Mad Men" ... so booze was a constant environmental thing (although I didn't start sneaking any until my early teens).

At some point I discovered that booze had the capability to shut down my emotions ... which have always been on the depression-angry side of the dial ... and if I drank enough, I wouldn't have to feel ANYTHING. As such, I was rarely a "social" drunk, as my goal was to get as close to oblivion without losing consciousness as I could ... and would consume (in the words of Beldar) "vast quantities", looking for that point when the emotions would flatline.

I had an internist friend at one time say he wished he could have studied me back in my "workout" days ... I would typically do a 2-hour workout six days a week, alternating between a day of assorted calisthenics and a day of free weights ... while hydrating with Gin Gimlets. He said he really didn't even have a model of how that would work on my system ... going through 8-12 ounces of gin while doing intense exercise. From my perspective, of course, it was a way to get a "baseline" of booze in my system cheaply, before taking a shower and heading out to the bars.

Frankly, the sheer quantity of booze I was drinking probably made it easier for me to quit, as I used to say that I really wasn't particularly interested in the first eight cocktails, as I didn't much notice them, but it was the second eight cocktails that I wanted to get to. Not having the first 8 drinks was not a notable sacrifice, although that assured me of not getting to the ones that meant something to me.

Now, admittedly, quitting drinking was NOT something that I had been contemplating ... I got suckered into what was somewhat of a low-level intervention. I had been very depressed for a very long time, and I was being presented with "a program" for that ... only it turned out to be an interview for admission into an out-patient "substance abuse" program at the now torn-down Prentice Hospital over at Northwestern. Interestingly, I was taking a substantial enough vitamin regimen that they didn't change or add anything to that (score 1 for Brendan knowing what his body needed!), except, of course, quitting drinking.

The program involved 3 hours of "group therapy" an evening, five days a week for six weeks (I re-upped for a couple extra weeks as I wasn't "buying into it" much), starting the week with an NA meeting and ending the week with an AA meeting. The group I was in with was a wide range of people, from a wimpy couple who were "worried" that "occasionally" they'd have 3 glasses of wine (!) in the evening, to a local news broadcaster and his producer who "hit bottom" when they showed up at a production meeting with the "wrong briefcase" (the one with the cocaine and the Uzi in it), with a couple of hard-core boozers and junkies in between.

To be honest, at that point in my life, quitting drinking was THE MOST PERVERSE thing to do that I could think of. Almost anything else would have been predictable to some extent ... suicide, moving into hard drugs, edging into more extreme lifestyles, etc. ... somebody would have money on that (I've always said that I was way ahead of the pack for the "Most Likely To Die By 30" honors). However, quitting drinking would be the biggest "fuck you" I could have said to the universe, so between that (and the noted "first 8 drinks" thing), I went ahead with it. And, of course, being the OCD maniac that I am, I never let it slip.

The problem, though, was that drinking was not JUST an addiction for me, it was my HOBBY. I was always collecting obscure drink recipes, obscure booze (at one time I think I had a couple of dozen types of rum in my closet), and related materials (the blender I still have is one I bought specifically for making "velvet hammers"), and throwing legendary parties. Plus, I was a huge fan of "tropical drinks" and my favorite restaurant, the late lamented Louie's Cantonese Cafe on Rush, was a great source of these, so I was "sad" every time I just had tea there, rather than a Zombie. Recently, my younger daughter (who's in a theater program) was shooting "a PSA" here about drinking, and was amazed when I dug into a closet and was able to provide "props" which hadn't much seen the light of day in 30 years. Amazing to see what was still in there (including cool Inca Pisco bottles from my trips to Peru!).

Of course, the fact that I had large amounts of alcohol only a couple of yards away from my desk is a testament to how solid my "pit bull" teeth were sunk into the "not drinking" thing. One of the things the AA folks would not have approved of was similar ... probably for the first year or so of my sobriety, I still went to the same local bars every night ... only drinking coffee and soda and stuff (they even got in non-alcoholic schnapps so I could do shots). Naturally, as time went on, it got less and less amusing to hang out with a bunch of drunk people, so I ended up spending less and less time at the bars (although I just found I'd been "namechecked" in a piece about Kronie's!) ... but it made for a "gentle" transition for me.

Anyway, that's most of my booze story (yeah, there's more ... but I'll keep the edgier stuff to myself). I was in the bar (Elliot's Nesst on Bellevue) drinking on June 30th, 1985, and was in the Chemical Dependence program and not drinking on July 1st, 1985 ... and haven't had a drink since.

Oh, yeah, one more thing ... I also credit the Chicago Bears with helping me keep sober. I typically would "drink off" a Bears loss, and that was the year the Bears won SuperBowl XX, only losing once (to the Dolphins) the whole year. I don't know if I would have "slipped" if they'd gone 8-8 or something, but I know things were a LOT easier with them having a great year like that!