You know, it's not like it's a job ... no, that would be TOO radical a departure for my existence. It's more like I'm grasping at straws and this crossed my path at a job fair. To be honest, I was "hoodwinked" - supposedly I was being brought in to talk about doing some writing for an "financial education" project for a division of Transamerica. Not so much ... although the financial education part is legit, it's just that I really wasn't being brought in as a writer, as a potential agent.

Now, If you know anything about me, you know I can't sell to save my life. I could be standing on the edge of the desert with a tray full of ice-cold Perrier and some guy would be dragging across the sand and opt for lapping at some fetid sewer water rather than go for one of the nice beverages I was offering. So, the prospect of getting into insurance sales was about as far "out of the box" for me that ANY potential work concept could be.

Well, call me transgressive, call me Discordian, call me just plain freaking nuts, but for the past couple of months I've been descending through this strange rabbit-hole. And today I PASSED MY STATE LICENSING EXAMS to be able to sell both Life and Health insurance (I know, it makes me throw up a little bit in my mouth just to type that). Go me, I guess.

What was very strange was that this process was HELL ... I'm, if nothing else, a smart guy - and am all too used to being able to scan over material and ace an exam. Not in this case. The past couple of weeks I've done little else but read the study manual, go over the "main points" guides, and take the on-line sample tests over and over and over. There are two parts on both of the exams, and one needs to score at least 70% on each to pass ... and I was, up until just the last couple of days, only barely hitting 70. ARRGH! Panic, panic, panic. Fortunately, I kept grinding, and, by the last sample tests (one at about 11pm last night, one around 6am this morning), I was finally getting scores above 80. It must have been just enough, as I passed all four sections I took today.

The testing place was pretty bizarre ... you couldn't bring in ANYTHING ... I had under a buck in change in one of my pants pockets and they made me take that back and put it in the locker with my other stuff ... thank goodness I wasn't in need of some tissues! Plus, every testing station was under constant video surveillance ... these folks weren't kidding around. I don't know what I could have "snuck in" that would have helped my anyway ... so much of these tests were based on things that nobody ever would need to keep in mind - stuff like how many days such-and-such form had to be filed by, how many months before X thing would expire on Y product, what was the maximum fine for various violations, etc., etc., etc. - all things that would be 30 seconds of looking it up were the info EVER needed. I've always been horrible (pretty much useless) at "rote memorization", so I was always getting screwed up when one option was 30 days and another was 31 days (to pick a repeated "error" from the tests). So glad this is behind me. 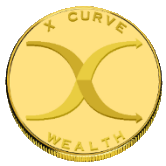 Anyway, just so that I could honestly say (and I really suck at lying) that I was doing "financial education", I'd set up a site dedicated to doing blogs about various financial topics. One of the more bizarre elements of my venturing into this biz is that I'm one of the most financially illiterate people I know, which is further complicated by my being terribly phobic around all things involving finances (if I was going to be on Fear Factor, they'd force me to write checks and do the monthly bills - my reaction would be about the same as having an arachnophobe stick his head into a box of tarantulas!).

I had discovered that I was able to grab a domain based on one of the key concepts - the "X Curve" - and so opened up a blog/video site at http://XCurveWealth.com (and came up with that swanky logo over there), and have been writing blog posts and putting up videos. I've got a couple of more posts/videos "in the can" as it were, but pulled back from working on that to get this testing out of the way. Of course, writing blogs, designing web sites, creating graphics, and even shooting/editing videos - and pimping it all out on social media - is "what I do well". The jury is still out on the "selling" aspect.

I look at people who are doing big bucks in this business, and most of them are "people" persons. I'm usually perfectly happy having most people in my life safely on the other side of a computer monitor, so I have my doubts about how well I'm going to be able to do. So far I've not had a single person sign up for emails, send in the survey, or contact me through the site ... and even more depressingly, I've not managed to garner even one "like" on the Facebook page I set up for this. I sure hope that I don't have to do a lot of "going out into the field" because most of the time when I'm talking to people they're looking at me like I have three heads and fangs dripping green slime ... and that's just making small talk ... I so far have not been able to successfully broach the subject of "financial education" with anybody face-to-face.

Not that the "product" is bad or scary. It's based on a whole new model of getting folks involved with their finances ... giving THEM the tools to make decisions and develop plans for what they want to do (see my review of Flipping Burgers to Flipping Millions for something that I'm going to be "mining" for blog/video ideas!). What we're offering is life-time "memberships" to the new Financial Centers across the country (again, this is a division of Transamerica, so there's a lot of "reach" out there), which, for $100 (lifetime), members get unlimited classes, unlimited access to mentors, and the opportunity to make money with referrals, etc.

While I've mentioned this in passing here (primarily in that book review), I've held back on "pulling the tarp off" of X Curve Wealth, and the rest of this until I passed my exams (as it would have been so humiliating to make a big to-do about this and then fail the tests). But, here it is.