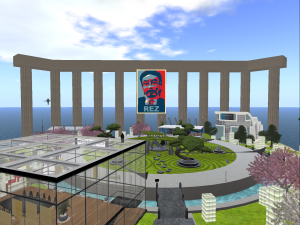 Well, Daughter #1 and her boyfriend just headed out to phase two of their winter vacation - going to spend a week and half with his family in San Diego.

Theirs is an interesting story ... back when I was working in SecondLife, Daughter #1 was very eager to get onto the Teen Grid (even though she still wasn't old enough at the time), and once she was in SL, she spent a vast lot of time hanging out there. And that's where she met her current BF ... something like six years ago. While I'm sure they did a lot of Skyping (or other web-based communications), they never were actually in the same room together until 2014, when they started doing this split vacation thing. Needless to say, that's a long time for anybody to be together, let alone teenagers (well, they're both in their 20's at this point) ... so I guess "sorting things out" in the virtual space can be a good thing!

This morning I was telling them about that book that I mentioned yesterday (as I think my daughter would like it), and had mentioned some of the building that I'd done in the waning days of Simuality/Liminati ... including that monumental (OK, Speer-esque) set of columns (if I recall correctly, each barrel comprising those was as large as I could get an individual SL prim to be) with a totally fascistic banner of my SL avatar, Eschatos Graves, encouraging the missing multitudes to simply "REZ" (click the pic for a bigger version). Eschatos in this picture is standing on top of the glass building in the foreground ... in other pics, where he's standing on top of the construction, he's a tiny speck from this angle - it's that big.

As much as I loved having Daughter #1 home (and tolerated the BF - although I've been practicing with the sound of having his last name attached to my kid's first), it's quite a relief to being back to being by myself while kicking around the house all day. Sort of sad that I'm not getting to see her for half her vacation, though.