No, the other stuff (750words) was very much a morning thing, coming out of the "morning pages" exercise ... and, frankly, it was a bit like going to the gym (or what I assume to be what "going to the gym" would be like), a structured bit of time that I had to desperately try to get to no matter what my schedule was. Needless to say, I was trying very hard to not put that sort of pressure on myself with this write-every-day concept. 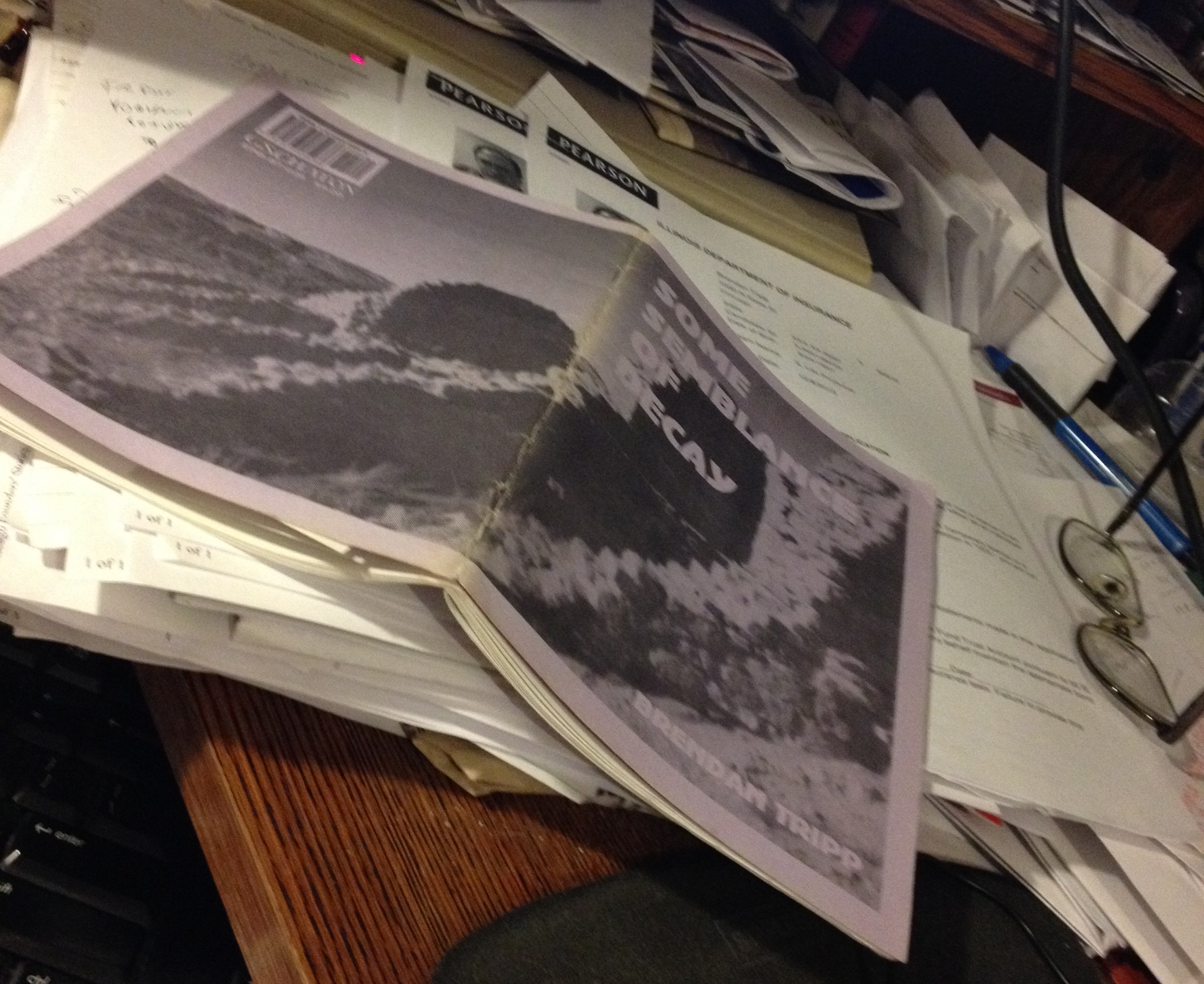 However, I've been rather busy the past couple of days, and I've been finding myself looking at the clock and realizing that I'm coming up short on hours (I'll admit to having hit "post" last night well before I was done writing the post, just to stay on the right side of midnight). Which is, frankly where I find myself tonight. I am in the midst of re-doing one of my old poetry chapbooks (see the pic ... click the pic if you want to see it big), and could have easily just kept churning through on that to 1 or 2am. It's one of the useful things of OCD - if I get into a "groove" on working on something (in this case, opening up in Word the text files generated by the OCR program from the scans I'd done of the pages in the book, and then tidying them up and pasting them into the big Word file that will eventually become the Kindle edition ... later cut-and-pasted into Publish for the new perfect-bound edition via Create Space), and it doesn't have any particular "break" points, I will just keep going and going and going until it's done, I fall asleep at the keyboard, or something interrupts me.

As I mentioned, I'd had some freelance Social Media work yesterday (helping a client pull together a multi-faceted pitch for a new account), and one of the things I'd "ideated" yesterday was doing little animated vignettes with a couple of things related to one of the brands (is that vague enough for ya?). Ever since I'd sent the package of stuff I'd worked up to the client yesterday afternoon, this thing was percolating around in my head, and to get my mind to SHUT UP about it, the first thing I did when I hit my desk this morning was to work on it. I was pleased at how it came out (despite my mainly having to work with screen grabs from a powerpoint presentation), and didn't go the extra mile in trying to do a voice-over or other audio track (it would have required me doing a couple of specific accents, that I thought might be more off-putting that not if I was missing the mark on them). What's better was that my client seemed thrilled to have the extra piece to put into the pitch. Yay me. I just hope the account comes through and it means some dribble of income.

Anyway, given the multiple re-do's I had to do on the past couple of poetry re-issues, I'm being a lot more systematic on fine-tooth-combing through these files. While the scan-and-OCR process is pretty good at going form the printed page to an electronic file, there's stuff it keep screwing up, like any "fi" or "fl" combination, and about half of the apostrophes (and the rest I have to change into a "styled" rather than plain ASCII mark), which come out as a bunch of funky code characters. The line spacing is also screwy ... taking lines out where there were originally several, and randomly throwing some in. I also (more irritatingly) find it messing up some words ... this was the second time I found "pare" being turned into "para" - hard to notice since it's in the spellcheck!

I really wish there was a market for my poetry. I'm constantly reminded reading through these how good I was at writing this stuff. Kinda sad that nobody gives a flying flip about it ...