Our family has some odd "traditions" ... one of which is that I "take down Christmas" on the weekend of the NFL Divisional Playoffs, which gives me an excuse to be more-or-less in front of a TV set for 6-8 hours a day for two days ... just about what's needed to get all the ornaments off the tree, put back in their boxes, and those boxes in the storage boxes, etc., etc., etc. and everything back in the storage closet. So that's pretty much what I was doing this weekend (and, dang it, rather than intra-divisional Schadenfreude, I found myself feeling bad for the Packers, just like the Vikings last week!). 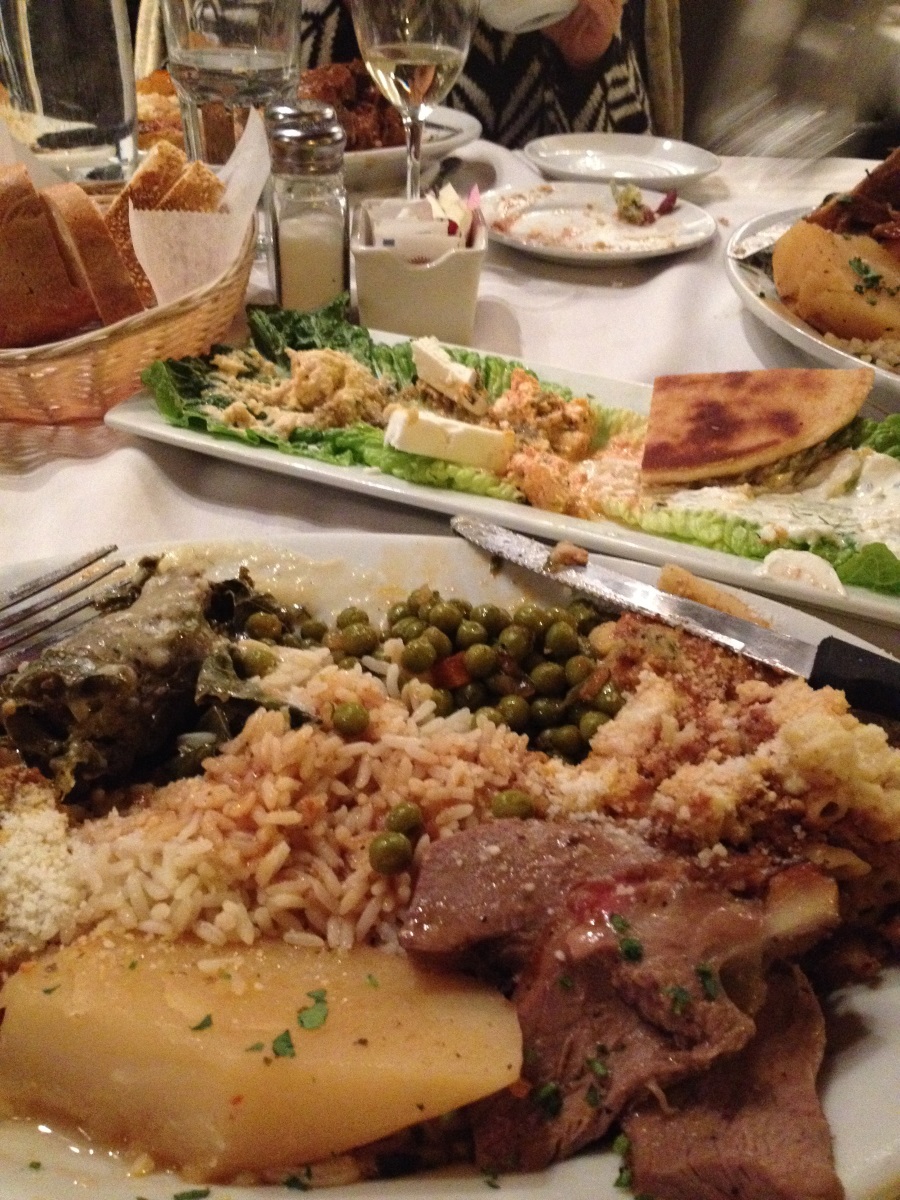 As Daughter #1 heads back to Urbana tomorrow (after her month-long winter break), we ended up going out for dinner last night down at Athena in Greek Town. As I'm sure I've bitched about in previous posts, one of the most irritating things about my on-going (unending?) joblessness is that I never can afford to go out to eat, which is a HUGE thing for me, as I pretty much lived in restaurants in my PR agency days. So, getting a chance to get some non-microwaved food was quite a treat! That pic over there ==> is of my "combo platter", with the remnants of a shared cold appetizer combo behind it (click for bigger). Athena is sort of a go-to place for us for birthdays (the Wife really likes it), so we're down there maybe a couple of times a year. Unfortunately, our other place (more for anniversary dinners, etc.) closed at the end of the year (Bistro Margo up on Wells in Old Town). The Wife and The Girls all had the lamb shank, but I just wasn't feeling it, so went with the combo platter (and a bowl of egg-lemon soup). Yum.

I was planning on posting last night, but I was pretty wiped out by the time we got home, and ended up falling asleep on the couch until past midnight. I did get up and get back to my desk about 1am, though, and (I think) got a "final" lay-out design set for those book review books. Frankly, I'm finding it a LOT easier to do these things for hard-copy versions though Create Space than doing stuff for Kindle. I certainly won't be able to "double up" on these, since the coding for Kindle (to make stuff look "right") is such a pain in the ass. Also, the originals of the reviews have color in them (book covers, link formatting), and I'm certainly not going to go into the expense of color interiors for the paperbacks, so I'm having to do greyscale pics for the covers, and re-doing the links (I'm keeping them underlined and then doing sub-script footnoting to a list of the URLs they point to) in a grey that will look different enough from the regular text. The block of notes at the end sort of replaces my "BTRIPP" sig and the CMP.LY badge on the reviews, which I figured didn't make any sense to keep, as they're not clickable in print. As far as skipping the CMP.LY things, I'm thinking that I blither on enough about where/how I got the books, that in the print version that should be good enough for the FTC.

I'm going to be missing most of the day tomorrow, as I'm renting a car down at Midway again to shuttle Daughter #1 back to school. We're on a bit of a tight schedule, as she has a 9am dental appointment here but needs to be in a class at 2pm there. I'm picking up the car at 9am, so hopefully I'll be back up with that by the time she gets out from the dentist, and can pack her up and hit the road ... it's only about a 3 hour drive, but if filling the cavity takes more than an hour we're gong to be cutting it close!