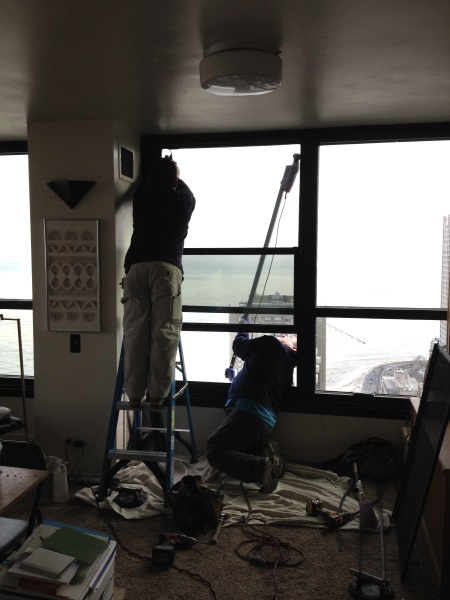 So, today they came in to replace the windows with issues (mind you, the "issues" in our case were sort of minor ... I'm not sure what they were looking for when they looked at them last spring, but we got one added to the list because it got internal frosting when cold) before the warranty ran out. I was preparing for the worst, after all it's freak'n February, not an ideal time to have open-air situations in Chicago. However, the guys showed up at 9am and were all done by 11am ... replacing one regular window and two where the lower part opened.

The regular window was remarkably straight forward ... if much of the work being done with a mallet (not the tool of choice, one would think, when dealing with windows!) ... they pulled out the rubber gaskets, whacked the framing until it popped off, cut through the sealant, and popped the window out with big suction things. For the others (like the one in this picture), they had to spend quite a bit hanging out the window, first with a knife, cutting the sealant on the outside, then using this saw thing on a pole (see pic <=== click for bigger) to get to the parts at the upper end of the window.

I had been prepared to be waiting all day for them to get around to working on our windows, so was pleased (if surprised) that they were done well before lunch. Unfortunately, I was still pretty exhausted from the 10 hours or so of heavy lifting I had to do in my office to get it ready for them to work on the window that needed to be replaced in here, so I wasn't able to quite reverse the process 100% today. Of course (as noted yesterday), some of what was coming out was not going back in ... with five old computers, three printers, one big flatbed scanner, and a big honking CRT monitor going off to the tech graveyard.

Some of these were very hard for me to part with, as they were key tools in the days I ran Eschaton full-time. In fact, along one side of the scanner (big and heavy, because it's old) I still had the post-its walking me through how to achieve the "carved stone" effect on the old Eschaton web logo ... which involved three graphics programs. Ah, good times. I was also sad to be parting with my old big monitor ... it was hot shit when I got it, but now I can get as big a screen in a flat monitor for a couple of hundred bucks, which will weigh 1/10th of what that beastie does. Another real hard thing to part with was my old TOWA daisy-wheel printer ... had that forever, and it was a workhorse for me. In fact, my old hand-made "work station" was built around its 22" width (with half-round cut-outs to be able to use the platen rollers). (sigh) I'm feeling about that sort of how I felt when The Wife finally convinced me (a number of years ago) to get rid of my (perfectly functional) IBM Selectric ... sad, sad, sad.

Anyway, I ended up not getting much of anything other than dealing with this stuff done today. It took me nearly two hours to fix what had gotten broken on my "curtains", which sucked up a lot of the day, and I was doing my usual "safety first" / "OCD hoarding" thing with the computers going out the door ... pulling (and labeling) the hard drives to go into my now Big Box of old HDs. I was surprised to find that one had two internal drives ... something that I don't clearly recall any of my systems having ... it may have been my last computer at Simuality/Liminati, but I'm not sure. I was amazed at how small some of those hard drives were (capacity-wise, of course) ... I have flash drives with more memory than one of them (with a whopping 20gb of storage!).

Have an odd day on tap tomorrow ... hope I'm going to get one design project knocked out before noon for a meeting in the afternoon ... and then it's probably off to the f'n suburbs again (so I might not be able to post in here tomorrow - we'll see how late it is when I make it back to civilization).