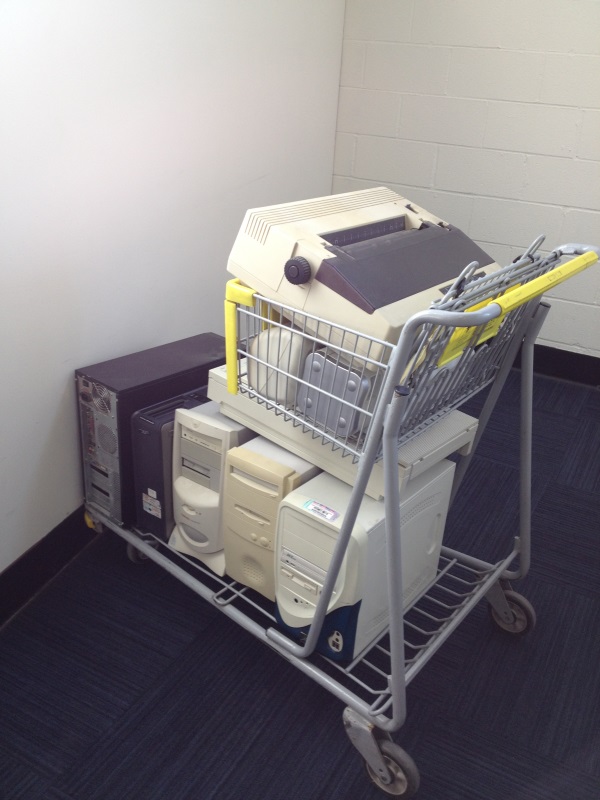 So, it's almost midnight AGAIN ... I've got around to thinking about posting in here past midnight a couple of times ... and it's just one more f'n frustration in my life. Dammit.

Anyway ... that window project forced me to consider getting rid of some of my old computer stuff. SOME OF WHICH I'M ALREADY REGRETTING NOT HAVING (isn't that how it always happens?). This was pretty tough because I had a long working relationship with several of these ... like that flatbed scanner which was hot shit when I bought it for Eschaton back in the day, and that massive TOWA daisy-wheel printer, which was my workhorse for ages. I'm really feeling guilty about those. And those two other printers, one was my main ink-jet for ages, and the other was one that I used for creating graphics for our old tutoring biz. Frankly, this feels very much like I'd just taken a car load of PETS to the vet to have them put down en masse.

Of course, this all feeds back into my other feelings of failure and doom. I don't understand people (oh, like my wife) who LOVE to throw shit out. Makes their day. Me, I feel like I'm forced to be the executioner of something that I have a connection to. Oh, that puppy's inconvenient, here, let's just slit its throat ... THAT'S the emotional load that comes with throwing stuff I've used consistently.

I am in a very, very, very bad spot emotionally. This week has been HELL on me, and I'm finding myself in a place where I can't do anything, and everything I touch turns to crap (as an example ... I just spent over an hour trying to send my daughter in college a Starbucks e-giftcard for Valentines Day, but the god-damned site wouldn't accept ANYTHING I typed in the "This gift is for:" text box as a "valid recipient", and wouldn't process the order without whatever the hell it was looking for as "valid" input there!), and I can't see anything getting any better EVER.

I'm really wishing I'd get dead. Not that ANYBODY f'n would care if that happened.