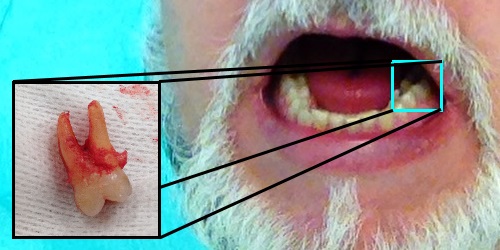 So ... after having put up with varying amounts of pain for several weeks, I finally got that taken care of. Because I'm broke, I ended up going through the clinic at the UIC Dental College, and the process thus far has only cost me like $150 ... which is pretty awesome. I'm going back in next week to consult about getting an implant (I'm sparing you a pic of the big ugly gaping hole in my jaw - but if you consider in that before-and-after shot - which you can click for a bigger version - how little of that big honking tooth was above the gum line, you can imagine the no-longer-filled-by-tooth deep gap in there), which is going to cost a lot more, but probably only a third of what a "regular" dentist would be charging.

I guess I was a "good patient" for the exam phase of this, because my cracked molar allowed the undergrad dental student who was working on me to use a new toy tool that only the grad students usually get to play work with. This was a high-intensity light source on a little flexy probe that they could put right up against a tooth. If there's a crack in the tooth, the light stops at the crack, and they showed me (with a hand mirror) how the light was stopping in my molar, definitely letting them know that I had a cracked molar (which seemed to have been a question as the cold and pressure tests they were doing were having extremely variable responses, sometimes hurting like hell, sometimes not at all, on the same points).

The faculty guy who was supervising the student working on me said the options were 1) do nothing, take painkillers (not that he was offering an open-ended scrip for anything good), 2) have a root canal, or 3) pull the tooth and do 3a) nothing (cheapest), 3b) a "bridge", 3c) an implant. Choices 2, 3b, and 3c all seemed to be pretty much on a par for cost. To his credit, the professor did offer his opinion that a root canal, given the way my tooth was cracked, had probably less than a 50/50 chance of fixing things ... so either yanking it or not (with assorted follow-up options) were my choices. Given the amount of pain I was in (and last Tuesday when I was down there for that, I was a mess, nauseated, distracted, only fit for napping - I couldn't even read!), I said, OK, let's pull it.

Now, I'd anticipated getting that done then, however, because I'm on blood thinners (to avoid having another bout of pulmonary embolisms like I got hit with back in the fall of '08), they needed me to get a blood test done ... irritatingly no more than 24 hours before the surgery ... to make sure I wasn't going to bleed out in the chair. Of course, these clinics are pretty iffy on scheduling, so I wasn't very hopeful, but they were able to give me an appointment for last Friday, and I managed to get the blood test done at my internist's office the afternoon before.

So, Friday I hop back down to UIC and wait for my appointment. These clinics aren't anything like a regular dental office ... more like a "cubicle farm" with dental chairs in each, and dozens of trainee dentists working on dozens of unhappy mouths - some of which were loudly reacting to their procedures. As you might envision from the size of that tooth ... this was not a simple project - not aided by the fact that I have very tightly spaced teeth - so they were not only having to yank that sucker out of the bone, but work it up past the molars on either side.

About half-way through the abuses to my mouth involved, I was wanting to make some snarky comments about whether as part of their training they were required to spend some time in the gym, as I was getting the impression that a bit more muscle would have been a good thing when it came to wielding those big silver grabby things. OUCH. Needless to say, it was not a very pleasant experience, and I was sort of wishing I'd had the knock-out drugs that they gave me to get my wisdom teeth out when I was 15 or so!

One of the other aspects of the "clinic experience" is the sort of "bum's rush" when they're done ... here's some gauze pads, here's a scrip for a few days of Vicodin, BYE! ... with another patient ready to move into the chair. No follow-up instructions, no place to get one's wits about one ... and, heck, they wouldn't even let me KEEP THE TOOTH! That bummed me out.

Frankly, not having the tooth has made me sad ... for a very odd reason. Back in the day, when I was in PR, we ate out all the time ... out clients were all major food companies, and we needed to keep up connections with the whole culinary world ... and that tooth had been a witness to all that really awesome food (and wine, and booze, back when I was drinking). It's felt like I've lost some connection to that gourmet history by not having that particular bit of dentition still in my face!