Five weeks from today, movers will come to take whatever possessions we have that The Wife deigns to consider worth keeping, and we won't live here any more. 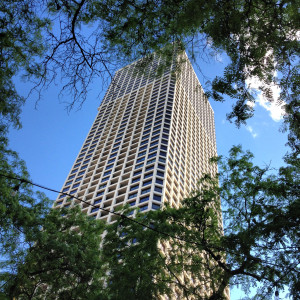 Amusingly (from an OCD stance), that means that I will have been in the building almost exactly 37 years (I didn't move in for a couple of days back in 1981 as the tenant left over from it being a rental building wasn't able to get out by the first).  Plus, I have lived within a block of here for 40 years.

I never thought I was going to leave.

But, reality has descended.  We have burned through all my "retirement" funds while desperately hoping that I would get a new paying* job (and it's been 9 years and over 4,000 resumes worth of trying), and we now need to get somewhere that can be supported by The Wife's salary alone.

Needless to say, this makes me feel useless on top of hopeless.

The real kicker is that The Wife has declared my 3,000 book library, my 2,000 or so album/CD collection, and 16 linear feet of photo binders not welcome to move into the new place.  Her solution was to have the first two collections given to charity and the rest just thrown out.  I noted that it is usually polite to wait until the body's cold before discarding its possessions, and have been dealing with the intent tied up in that statement for the past few months.

In fact, I said the wrong thing (related to Suicidal Ideation) in the wrong room about a month ago and got whisked off to the ER for a psych evaluation, leading me to be four weeks in Intensive Out Patient - IOP settings (two programs, the latter was closer to a Partial Hospitalization Program - PHP at six hours a day) ... neither of which did squat for me, with the second making me feel more suicidal than I was going in.

The main thing that the IOPs did was cut the time I had to deal with stuff in half.  My brother has fronted me the funds to get a storage space, and now I have to deal with getting a massive number of boxes from here to there, and in a manner that won't result in the building charging for dedicated elevator time.

Now, the place we're moving to is fine and would have been an acceptable option under other circumstances, but I can not face the elimination of all my stuff, so the next month is going to be insane with my boxing it all up (yes, of course I have system of sorting, listing, and labeling it all) and taking it out about 9 boxes at a time (one luggage cart worth - that I can "sneak" out with) in one 2-hour ZipCar rental.  I figure that this should take about 10 trips over the five weeks, so that's doable, but a major pain in the ass (or, more likely, back and arms).

So, here's the mother of all "sucks to be me" scenarios.  I'm still not convinced that I still want to be alive come April.

* I, as y'all certainly know, have had several gigs over the past decade, but most were not paying, in terms of my getting money for doing them.  I'm the bitter owner of 20-50% of a number of start-up ventures in which I was working "for equity" in settings which never developed any.