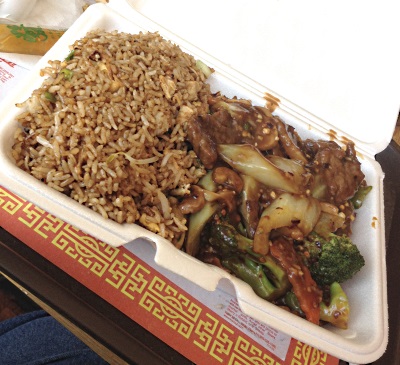 One of the first things that I started to do when we moved up here was to figure out what the various food options were. Having spent the past 40 years living in the middle of "Rush Street", I'd been used to a certain level of near round-the-clock (albeit spendy) possibilities. We're only a couple of stops up the Red Line from Argyle ("Chinatown North"), and a couple of stops the other way from Devon (a bus ride from "Little India"), so the best options tend to run in those circles.

I have always been a big fan of cheap Chinese food, from the legendary Louie's Cantonese Cafe down on Rush St. (closing in the 80's), to Empire up on Division (closing a couple of years ago), and I ended up stopping in for lunch specials at a number of places around here. Since I'm now into a decade's worth of no noticeable income, I'm always looking for what's good without pushing the tab much more than what would come from hitting McDondald's, and finally found the right triangulation of food, cost, and location.

I end up eating at China Palace (right under the Thorndale el stop) 2-3 times a week. Their lunch special (egg roll, fried rice, and entree) is a very reasonable $5.75, with a good selection of items (but hardly their whole menu) available. Needless to say, at that price point, I'm willing to make compromises ... and the most evident of these is the "take out" vibe, even if you're eating in, with the styrofoam container, plastic fork and spoon, sauce packets, and minimal napkins. The food, however, is quite good, and I'm pretty sure that their kitchen, if not working under the constraints of what was possible with such a small budget, could really produce excellent dishes. I'd call most of what I've had (and I've eaten through most of the lunch specials) is in the 70-90% range, with some being notable (they've won a GrubHub award for their orange chicken), and some being just OK.

The Girls and I went up there earlier this week specifically to check out some soups and appetizers, and the spectrum was similar, with a really excellent crab rangoon, and quite serviceable hot-sour soup, to fried wontons that were only "meh". I've been constantly impressed with their egg rolls, which are almost perfect in structure, but would be improved with (pricier) additions to the filling, like baby shrimp, etc.

The one downside to this is the location, which is a bit over a half-mile from our place here. Were it a block or so away, I'm sure I'd be swinging in there with even more frequency, but given my on-going knee/ankle issues, it's not something that I'm glad to do on foot, so I'll typically plan my trips up there in concert with some other outings requiring public transit (it's right at the Red Line, a half block to the 36 bus, and just 3 blocks from the 151 and 147 buses).