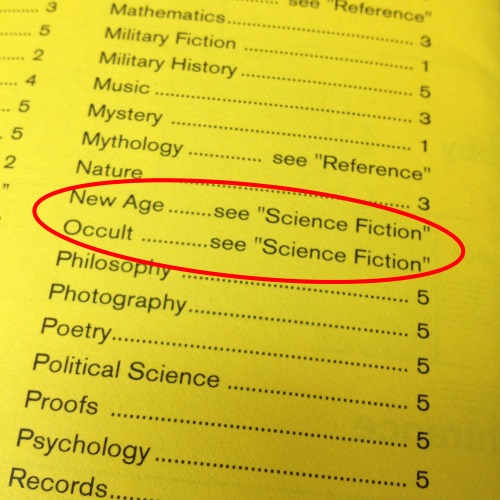 Went down to the Newberry Library Book Fair this morning. It (and the Bug House Square event that was Saturday) was a major feature of our summers when we lived down there ... now it takes some planning. I was able to match it to a meeting (the Library being only a block or so from Hazelden), so that helped. I also have been at war with The Wife regarding books. I've gone from having more than 2,000 books around to having a couple of dozen, and she's hellbent that I'm not going to start a new collection, so I was going in to the Book Fair only half-looking, and then in particular sections.

Speaking of sections ... NewAge/Occult titles have been one of my main reading areas over the past couple of decades, so it was an affront to see these shunted off as some sub-category of SciFi! Not only did they not rate their own area, but (as far as I could tell) there was almost nothing along those lines in the SciFi area. My paranoia ran to "hmmm, did the Moody Bible people take over Newberry???", because it sure felt like those topics were being intentionally suppressed. It seems to me that there was more stuff in that niche at previous events.

I guess it's just as well ... being as broke as I've been, I wasn't looking to spend too much ... and I sort of limited my purchases to ten bucks' worth. Of course, Sunday is their half-price day, so that still "left some meat on the bone". I got four books and three CDs for $9.50, which is reasonably close to the dollar store's ticket price. My finds were mainly from the Archaeology and Science tables (although one might have been in Anthropology). Eagle-eyed readers of previous reviews will recall that I've had a good number of archaeology books from the NLBF in previous years. One thing that surprised me this year was the sheer quantity of CDs they had out ... if my memory serves, it was twice the table space than was given over to it before. Maybe people are abandoning their hard-copy units in favor of computer files ... dunno. I got a copy of the Beatles' "White Album", a "music of the Andes" disc, and a newagey N.A. flute thing (the CDs were a buck and a half each, marked down from $3).