I'm still feeling a bit "under the weather", but at least I'm more functional. The right ureter is sore, something that hadn't happened previously, and I'm peeing out what I am guessing to be small clots (you did want to catch up on all the details, yes?). I'm back to peeing through the sieve thing so I can catch any stone fragments coming out - but very little has been showing up. The stuff that has been there so far has "smooshed" when I've tried to pick it out with the tweezers, so I'm pretty sure those aren't stones ... certainly nothing like the "gravel" I collected previously. 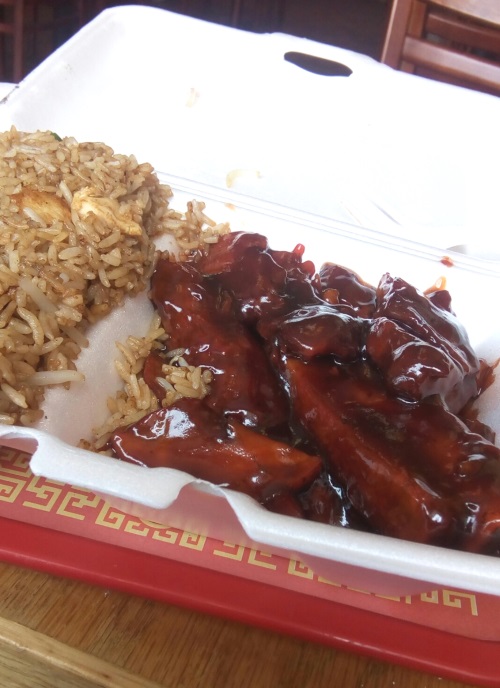 I finally made it back out to China Palace for lunch ... I think the week between meals there was the longest I've gone not dining with them since we moved up here. I was still a bit "off my feed", so ended up going with something I don't typically order, their BBQ Pork & Rib(s) (it's written plural, but on the lunch special you just get one). I'd recalled this as being a smaller amount of food than it was, but since I was looking to heal, it was providing a boost of protein (and sugar, which I certainly don't need).

I rolled out of there and just caught the #36 bus to get down to Walgreens to pick up some other pills the urologist was adding to the mix (and re-order my Victoza injectable - wonderful drug, but painfully expensive, and it seems like every month I need to have the pharmacists do battle with both the insurance and the manufacturer ... who is supposed to be knocking the co-pay on that to no more that $20 per "pen", but in recent months it's been coming in at almost twice that).

I ducked a "self hatred" session this evening ... I'd planned on going down to my "regular" 7pm Friday night meeting at St. James, which, if the #147 bus is playing nice, can be just 20 minutes door-to-door, despite it being nearly 7 miles away. However, when I got out to the bus stop with a half hour to get to the meeting it was showing no bus for 15 minutes - which wasn't just "cutting it close", it was pretty much guaranteeing that I would be late, and beating myself up (for not checking the bus times earlier and, and, and, and ...) all the way down there. So, when a #151 bus showed up, I opted to hop that to get down to the Rec Room a half-hour early for their 7:30 meeting. Not ideal, but I have to grab glimmers of sanity where I can find them.