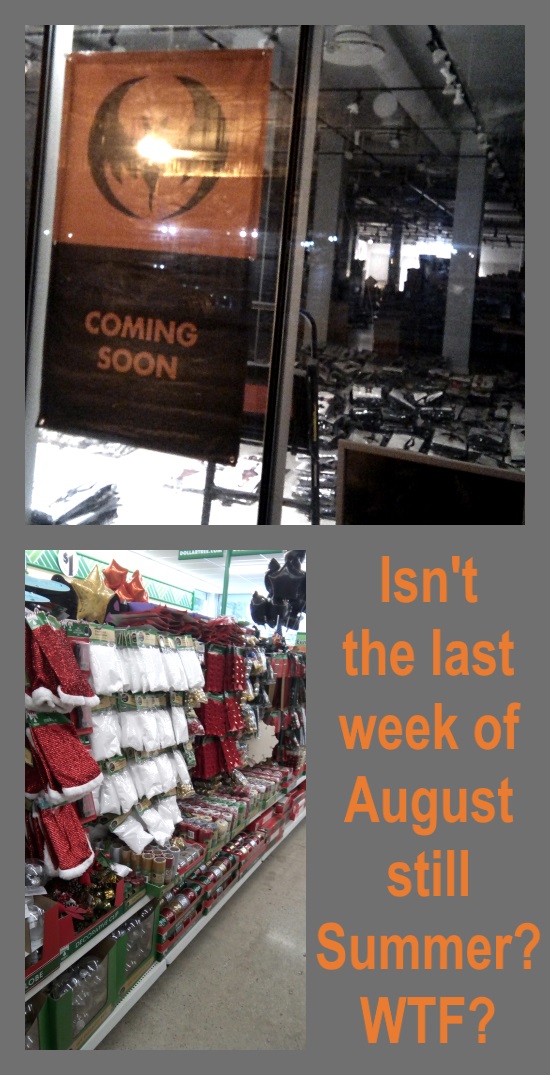 OK, I'm not one of those people that live for the summer, I'm a Fall guy myself (no, not like that), and enough of a "fogeygoff" to have a deep affection for the concept that Everyday Is Halloween.

My seasonable sensibilities have been assaulted with a one-two punch in the past few days, the first shot being running across a "pop-up" Halloween store getting stocked on Belmont, just east of the El ... TWO MONTHS before Samhain ... which I think is only just on the outer edge of being calendrically OK ...

And then there's the haymaker of CHRISTMAS IN AUGUST!!!

Yes, arriving a full FOUR MONTHS in front of Sanity Clause (a third of a year), the folks at Dollar Tree already have the Xmas swag out. Really? REALLY??? Who buys this stuff this far out from the holiday?

C'mon ... that's like having the Fourth of July stuff out prior to St. Patrick's day (although, come to think of it ... Dollar Tree might jump the gun on that one equally as much). It's JUST NOT RIGHT. And, after all, it's not like you're saving by shopping early there ... every freak'n thing in the store's a buck ... sure, you might get first crack at wrapping paper you favor, but what other purpose is there in doing any of that stuff until after Thanksgiving?

Sheesh! Well, pardon my rant, but I was quite taken aback by this all. As usual, clicking on the image over there will get you to a larger version, just in case you wanted to wallow in the horror.